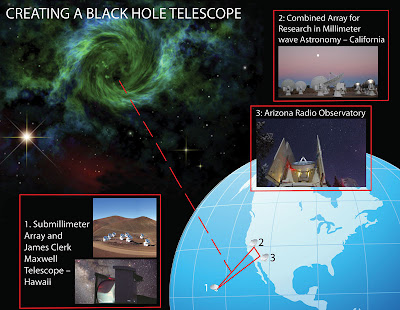 The astronomers linked together radio dishes in Hawaii, Arizona and California to create a virtual telescope more than 2,800 miles across that is capable of seeing details more than 1,000 times finer than the Hubble Space Telescope. The cosmic target of the observations was the source known as Sagittarius A* ("A-star"), long thought to mark the position of a black hole whose mass is 4 million times that of the sun. Though Sagittarius A* was discovered three decades ago, the new observations for the first time have an angular resolution, or ability to observe small details, that is matched to the size of the black hole "event horizon" -- the region inside of which nothing, including light, can ever escape.

The concept of black holes, objects so dense that their gravitational pull prevents anything including light itself from ever escaping their grasp, has long been hypothesized, but their existence has not yet been proved conclusively. Astronomers study black holes by detecting the light emitted by matter that heats up as it is pulled closer to the event horizon. By measuring the size of this glowing region at the Milky Way center, the new observations have revealed the highest density yet for the concentration of matter at the center of our galaxy, which "is important new evidence supporting the existence of black holes," said Sheperd Doeleman of MIT, lead author of the study that will be published in the Sept. 4 issue of the journal Nature.

"This technique gives us an unmatched view of the region near the Milky Way's central black hole," Doeleman said. "The new observations have a resolution equivalent to being able to see, from Earth, a baseball on the surface of the moon."

The key to making these observations is a technique called very long baseline interferometry, or VLBI, which links simultaneous observations from several radio telescopes that can be thousands of miles apart. The signals from these radio dishes are combined to create a "virtual" telescope with the same resolving power as a single telescope as large as the distance between the participating dishes. As a result, VLBI can reveal exquisitely sharp details. To create the continent-sized telescope, the team developed and installed special equipment at four observatories: the Arizona Radio Observatory's Submillimeter Telescope (ARO-SMT) of the University of Arizona, the Combined Array for Research in Millimeter-wave Astronomy (CARMA) in California, and both the James Clerk Maxwell Telescope (JCMT) and the Submillimeter Array (SMA) in Hawaii.

The new observations were done using very short radio waves of 1.3 millimeters wavelength, which can penetrate the fog of interstellar gas that blurs observations at longer wavelengths. Like a distant light seen through a dense mist, longer-wavelength views of the Galactic Center are dimmed and distorted. "The short wavelength observations combined with the large distances between the radio observatories is what makes this virtual telescope uniquely suited to study the black hole," said Lucy Ziurys, Director of the Arizona Radio Observatory and a co-author of the study.

Though it takes light more than 25,000 years to reach us from the center of the Milky Way, the team measured the size of Sagittarius A* to be only one-third the Earth-sun distance -- a trip that light would make in only three minutes. The astronomers concluded that the source of the radiation likely originates in either a disk of matter swirling in toward the black hole, or a high-speed jet of matter being ejected by the black hole. "Future observations that create even larger virtual telescopes will be able to pinpoint exactly what makes Sagittarius A* light up," Doeleman said. "Most galaxies are now thought to have black holes at their centers, but because Sagittarius A* is in our own galaxy, it is our best chance to observe what's happening at an event horizon."

"This pioneering paper demonstrates that such observations are feasible," commented theorist Avi Loeb of Harvard University, who was not a member of the discovery team. "It opens up a new window for probing the structure of space and time near a black hole and testing Einstein's theory of gravity."

This research involved 28 co-authors from several institutions, including the MIT Haystack Observatory, the Harvard-Smithsonian Center for Astrophysics, CARMA, the Arizona Radio Observatory of the University of Arizona, the James Clerk Maxwell Telescope, University of California at Berkeley, the California Institute of Technology, and the Max Planck Institute for Radioastronomy, among others. This work was funded by the National Science Foundation.
Posted by Unknown at 4:26 AM