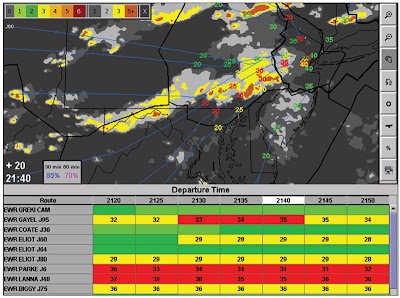 A screen shot of weather and flight information for Newark, NJ, as compiled by the computer tool developed at MIT that could cut weather-related airline delays. Image / MIT Lincoln Laboratory
MIT researchers are working toward a computer tool that could reduce airline flight delays due to weather. Already, they have found that a prototype deployed in the New York City region cut delays last year by 2,300 hours, saving the equivalent of some $7.5 million in operating costs.

The team, led by Richard DeLaura of MIT Lincoln Laboratory's Weather Sensing Group, estimates that fully implementing the Route Availability Planning Tool (RAPT) in the New York region alone could save 8,800 hours per year, or $28 million.

"It certainly provides us with exceptional benefits in most scenarios with severe weather," says Leo Prusak, the Federal Aviation Administration district manager for the New York area. "I think it's a fabulous product."

Deploying RAPT at other key spots all over the country could reduce delays at both large and small airports, DeLaura says. Lincoln Laboratory studies suggest that getting even two or three additional flights per hour out of airports during thunderstorms in highly congested areas can significantly reduce the weather-related delays that ripple across the nation's air travel system.

RAPT gives air traffic managers assistance in deciding whether to allow planes to take off during inclement weather, increasing the odds of sneaking a few jets out between thunderheads. The computerized tool takes weather information from satellites and radar systems, makes predictions about whether a pilot would choose to fly through such conditions, and displays the information graphically to enable an air traffic controller to make a quick decision.

The RAPT display shows a map of the airport with lines radiating outward to indicate the various departure routes. A grid below the map lists departure times in rows, divided into columns of five minutes running from the present to half an hour in the future. The color of each rectangle on the grid indicates whether departure at that time along that route seems feasible. Red means the route is blocked. Yellow means there's some heavy weather that might pose problems. Dark green says there's weather, but that it shouldn't be an issue. Light green represents clear sailing.

Generally, air traffic managers get weather information and have to come up with a picture in their heads such as the one RAPT displays, then make decisions based on that mental image. If the weather is changing rapidly and there are many flights in the air, the process of conjuring such a picture can become so time-consuming that controllers decide not to let any flights out. Instead, they concentrate on landing the ones in the air.

But if too many departures are stuck at their gates, the arriving aircraft have no place to go once they land. The result is a major traffic jam.

DeLaura hopes that RAPT will take away some of the managers' burden, making more departures possible and thus minimizing delays.

RAPT bases its guidance on a computer model that combines the departure route geometry, forecasts for precipitation intensity and the height of radar echo tops (a measure of storm height), and a model for pilot behavior in thunderstorms. It estimates the probability that pilots will deviate significantly to avoid the weather along their routes and assigns the departure route status color based on that probability.

A prototype of the system has been used in the New York City region -- including LaGuardia, JFK, and Newark airports -- for about four years, with modest funding from the Port Authority of New York and New Jersey.

This past year, the FAA began funding RAPT. The researchers are currently adjusting the model to take more account of the impact of incoming planes. They are also picking a site for the deployment of a second prototype system.
Posted by Unknown at 4:32 AM