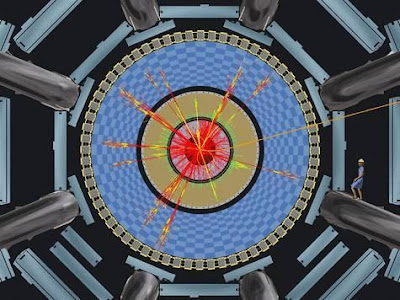 Two Protons Walk Into a Black Hole,
And Other Jokes Physicists Tell

MEYRIN, Switzerland -- One recent Saturday morning, physicists here shot the first beam of subatomic matter into the most powerful particle accelerator ever built. The machine -- a 17-mile circular tunnel that sits 330 feet underground along the Franco-Swiss border -- is designed to smash protons together at nearly the speed of light. It will allow physicists to search for undiscovered particles, extra dimensions of space, dark matter and perhaps even microscopic black holes.

In a nearby auditorium, another groundbreaking experiment was under way: improvisational-comedy boot camp. Twenty-five researchers stood in a circle and awkwardly eyed one another. One of them told a physics joke -- which was funnier if you're familiar with bosons and hadrons, types of subatomic particles. On cue, they tossed an imaginary red ball around the room. That led to chaos as they contorted their bodies to form letters of the alphabet and collapsed onto the floor giggling.


Physicists at Switzerland's CERN institute, site of the world's largest particle accelerator, are in pursuit of another dimension of space: comedy. (Sept. 4)
Physics concerns itself with the universe's big questions. Why is there more matter than antimatter? And what's causing the universe to expand? Now there is this: Can physicists be funny?

For scientists at the European Organization for Nuclear Research, or CERN, the question is no joke. This month, CERN will launch the most ambitious particle-physics experiment in history. Its physicists will switch on the Large Hadron Collider, or LHC, a project that's been 14 years and $9 billion in the making. Physicists hope the LHC -- so-named because it smashes hadrons, which are protons and other particles composed of quarks -- will help them find new particles and undiscovered physical forces. It's a project that may offer new insight into what happened milliseconds after the Big Bang, when the cosmos was a fiery soup of elementary particles.

It has also incited controversy. Critics -- who grew increasingly alarmed when a pair of physicists casually noted that the collider could act as "a black-hole factory" -- have lobbied against the experiment, arguing that it could spawn a black hole that devours the Earth. Other scientists worry that if the project fails, it will doom future funding for large-scale physics experiments.

Now, the physicists are seeking new ways to tackle obstacles and to explain the project to the public. To hone their communications and trouble-shooting skills, some took the unusual step of hiring an improvisational-comedy coach.

Maybe, they say, learning to improvise will help them think creatively about some of the toughest questions of physics, such as why gravity is so much weaker than the other fundamental forces, and why 95% of the universe seems to be missing.


Bob Stanek
"Improv has got to be more difficult than doing physics. You have to think in milliseconds," said Bob Stanek, a particle physicist who is leading CERN's improv-comedy experiment. A short, wiry 59-year-old Chicago native with a white beard and round, gold-rimmed glasses, Mr. Stanek said he figured improv would help the physicists react quickly if something goes wrong. "When you're discussing things that go on here on a daily basis -- why your detector doesn't work, why your machine isn't collecting data -- you have to know how to respond in a quick manner," he said.

Mr. Stanek brought in Charna Halpern, an improv-comedy guru from Chicago whose roster of star students includes comedians Tina Fey, Mike Myers and Stephen Colbert. Since launching her Chicago theater in 1981, Ms. Halpern has trained executives and managers at companies such as BP and Abbott Laboratories. Ms. Halpern, 56, plans to return to CERN in October, when the physicists are scheduled to put on their first public performance. "The smarter you are, the better you are at this. That's why physicists will be funny," said Ms. Halpern, director of the iO theaters in Chicago and Los Angeles.

On their first day of improv class, the physicists sat in a cavernous auditorium where CERN's scientists normally gather for theory seminars. Equations from the previous day's lecture covered the 36-foot-wide blackboard.

As a warm-up exercise, Ms. Halpern and two actors from her theater had the physicists invent an imaginary product. In short order, they came up with something called "Wi and Dry" -- satin adult diapers equipped with a wireless Internet signal -- and composed a jingle that, unfortunately, is unprintable.

Later, Ms. Halpern said the real objective was to "brainwash students into agreeing with one another." Improvising requires seizing on other actors' ideas, even bad ones, she said.

Some physicists balked at this rule. "It's so much the antithesis of what goes on at CERN," said Steven Goldfarb, 45, a particle physicist from Michigan who has been at CERN for 20 years.

"You don't just go to the Higgs physics meeting and ask a stupid question. We're trained to be critical," he added, referring to theory sessions devoted to the Higgs boson, an elusive particle that CERN's physicists hope to discover.

Looking ridiculous soon became unavoidable. During a memory and listening drill on the second day of comedy school, the physicists formed a circle and tossed around an imaginary ball. A few got carried away. "Panda bear!" one participant yelled, flinging his arms out. Seth Weitberg, one of the improv coaches, gently reminded him that he was supposed to say "red ball." He asked what the group had learned from the exercise. "Listening," one physicist said. "Eye contact," someone else added. "Saying yes," said another.

"It's great that you just jumped into it without thinking," Ms. Halpern said.

Within a few hours, the physicists were improvising monologues and scenes. Common themes included complaints about the CERN cafeteria, awkwardness in social situations, difficulty meeting women and rivalry between the LHC's two large particle detectors, Atlas and the Compact Muon Solenoid, or CMS. One newly minted comedian riffed on physicists' habit of sitting around drinking coffee all day.

"I'm thinking about building the LCC -- the large coffee collider," he said.

Another made a joke about subatomic particles that made her stage partner blush. "Do my bosons give you a hadron?"

When class ended, 17 CERN researchers signed up for the new improv-comedy troupe, which is scheduled to perform before several thousand people at a launch party for Atlas next month.

Tom Whyntie, 24, who works on one of the LHC detector's silicon-tracking devices, said improvising could teach physicists how to build on one another's ideas. "This idea that every idea is respected does not happen enough," said Mr. Whyntie, of Portsmouth, England. "People are afraid of being shut down."

A lot is at stake as the physicists prepare to switch on the collider. CERN's scientists face pressure to find the mysterious Higgs boson, an undiscovered particle that the collider should detect, if it in fact exists. Failure to find the hypothetical Higgs could unravel more than three decades of progress in physics.

Then there's the little matter of black holes and other cataclysmic events -- freak outcomes that CERN officials have dismissed as virtually impossible, but which one prominent physicist noted have a one in 50 million chance of occurring. "Perhaps it was not so smart to call it a black hole," said Peter Jenni, a spokesman for the Atlas experiment.

It remains to be seen whether comedy classes will help CERN scientists explain their work to the public. CERN's in-house science writer has already made a rap video about the LHC and posted it on YouTube, where it has been viewed some 900,000 times.

Other stabs at humor are less likely to go viral. Particle-physics jokes can be rather opaque. A classic example: "A neutron walks into a bar and asks how much the drinks cost. The bartender replies, 'For you, no charge.' "

And consider the following one-liner, delivered in the CERN cafeteria by Mr. Goldfarb: "Two protons walk into a black hole." That's the joke.
Posted by Unknown at 5:37 PM