Black hole updates :Does the Black Hole Look Back? 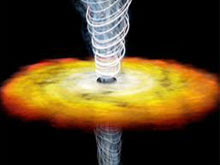 Researchers Look Into a Black Hole (But Does the Black Hole Look Back?)

Researchers have gotten the closest look yet at the supermassive black hole that is believed to lurk in the center of the Milky Way, using radio telescopes to peer through the cosmic dust. Lead astronomer Sheperd Doeleman says: “One of the problems with looking at this particular source is that we have to look through our galaxy. It’s a blessing that it’s this close, but it’s a curse because it’s obscured by gas and dust” [SPACE.com].
Black holes can’t be directly observed, because their gravitational pull is so strong that nothing, not even visible light, can escape. To study our local gravitational monster, researchers homed in on Sagittarius A*, the bright radio-emitting body thought to mark the position of the black hole. Because Sagittarius A* is likely fueled by the black hole’s activity, a better look at the radio-emitting body can provide more details about the black hole [Science News].
Researchers have known that Sagittarius A* emits radio waves for some time, but hadn’t known much else about the enigmatic radiation source. Based on the new findings, published in the journal Nature [subscription required], they’ve now concluded that the source of the radiation likely originates in either a disk of matter swirling in toward the black hole, or a high-speed jet of matter being ejected by the black hole. Future investigations will help answer the question of what, precisely, they are seeing: a glowing corona around the black hole, an orbiting “hot spot,” or a jet of material [Telegraph].
To get an accurate image of this distant object, researchers combined observations from radio telescopes in Arizona, California, and Hawaii to create a “virtual telescope” with a virtual dish about 2,800 miles in diameter. The resulting level of accuracy at such a distance is over 1000 times more precise than we can get from the Hubble, and is the equivalent of being able to pick out a baseball sitting on the lunar surface from Earth [Ars Technica].
See More http://24hoursnews.blogspot.com/2008/09/super-massive-black-hole.html
Posted by Unknown at 5:02 PM