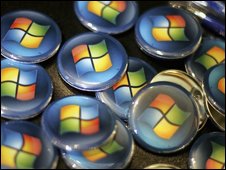 A worm that spreads throughout low security networks, memory sticks, and PCs without the most recent security updates is posing on the get higher threat to users.
The malicious program, known as Conficker, Downadup, or Kido was first discovered in October 2008.
Although Microsoft released a patch, it has gone on to infect 3.5m machines.
Experts warn this figure could be far higher and say users should have up-to-date anti-virus software and install Microsoft's MS08-067 patch.

According to Microsoft, the worm works by searching for a Windows executable file called "services.exe" and then becomes part of that code.
It then copies itself into the Windows system folder as a random file of a type known as a "dll". It gives itself a 5-8 character name, such as piftoc.dll, and then modifies the Registry, which lists key Windows settings, to run the infected dll file as a service.
Once the worm is up and running, it creates an HTTP server, resets a machine's System Restore point (making it far harder to recover the infected system) and then downloads files from the hacker's web site.
Most malware uses one of a handful of sites to download files from, making them fairly easy to locate, target, and shut down.
But Conficker does things differently.
Anti-virus firm F-Secure says that the worm uses a complicated algorithm to generate hundreds of different domain names every day, such as mphtfrxs.net, imctaef.cc, and hcweu.org. Only one of these will actually be the site used to download the hackers' files. On the face of it, tracing this one site is almost impossible.
Speaking to the BBC, Kaspersky Lab's security analyst, Eddy Willems, said that a new strain of the worm was complicating matters.
"There was a new variant released less than two weeks ago and that's the one causing most of the problems," said Mr Willems
"The replication methods are quite good. It's using multiple mechanisms, including USB sticks, so if someone got an infection from one company and then takes his USB stick to another firm, it could infect that network too. It also downloads lots of content and creating new variants though this mechanism."
"Of course, the real problem is that people haven't patched their software. If people do patch their software, they should have little to worry about," he added.
Technicians have reverse engineered the worm so they can predict one of the possible domain names. This does not help them pinpoint those who created Downadup, but it does give them the ability to see how many machines are infected.
"Right now, we're seeing hundreds of thousands of unique IP addresses connecting to the domains we've registered," F-Secure's Toni Kovunen said in a statement.
"We can see them, but we can't disinfect them - that would be seen as unauthorised use."
Microsoft says that the malware has infected computers in many different parts of the world, with machines in China, Brazil, Russia, and India having the highest number of victims. 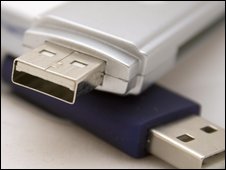 The worm can also spread via USB flash drives.
Posted by SANJIDA AFROJ at 5:29 PM

In a acclaimed annihilation case, the Fashion Replica Watches Online that the victim wore on his wrist eventually led to the arrest of his murderer. If a physique was begin in the English approach in 1996 by a fisherman who bent the body, and the 4.5 kilogram ballast absorbed to it through the victim's belt, in his net about 10 kilometers from the English coast, a Rolex wristwatch was the alone identifiable article on the body.