MIT) has developed carbon nanotubes that can be used as sensors for cancer drugs and other DNA-damaging agents inside living cells. 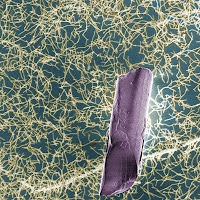 A multidisciplinary team at the Massachusetts Institute of Technology (MIT) has developed carbon nanotubes that can be used as sensors for cancer drugs and other DNA-damaging agents inside living cells. The sensors, made of carbon nanotubes wrapped in DNA, can detect chemotherapy drugs such as cisplatin as well as environmental toxins and free radicals that damage DNA.
“We've made a sensor that can be placed in living cells, healthy or malignant, and actually detect several different classes of molecules that damage DNA,” said Michael Strano, Ph.D., leader of the research team and a member of the MIT-Harvard Center of Cancer Nanotechnology Excellence. Dr. Strano and his colleagues published their work in the journal Nature Nanotechnology.
Such sensors could be used to monitor chemotherapy patients to ensure that drugs are effectively battling tumors. Many chemotherapy drugs are powerful DNA disruptors and can cause serious side effects, so it is important to make sure that the drugs are reaching their intended targets. The sensor can detect DNA-alkylating agents, a class that includes cisplatin, and oxidizing agents such as hydrogen peroxide and hydroxyl radicals.
“You can figure out not only where the drugs are, but also whether a drug is active or not,” said Daniel Heller, a graduate student in chemical engineering and lead author of the paper.
Using the sensors, researchers can monitor living cells over an extended period of time. The sensor can pinpoint the exact location of molecules inside cells, and for one agent, hydrogen peroxide, it can detect a single molecule.
The new technology takes advantage of the fact that carbon nanotubes fluoresce in near-infrared light, whereas human tissue does not, which makes it easier to see the nanotubes light up. In addition, each nanotube’s fluorescence depends strongly on events taking place on the surface of the nanotube, such as when molecules bind to the nanotube surface.
Each nanotube is coated with DNA, which binds to DNA-damaging agents present in the cell. That interaction between DNA and the DNA disruptor changes the intensity and/or wavelength of the fluorescent light emitted by the nanotube. The agents produce different signatures that can be used to identify them. Moreover, the investigators developed signal processing methods that separate the signatures of multiple different molecules binding to the nanotubes.
“We can differentiate between different types of molecules depending on how they interact,” Dr. Strano said. He added that future studies will use the new nanotube sensors to study the effects of various antioxidants, such as the compounds in green tea, and learn how to more effectively use toxic chemotherapy drugs.
This work, which was detailed in the paper “Multimodal optical sensing and analyte specificity using single-walled carbon nanotubes,” was supported in part by the NCI Alliance for Nanotechnology in Cancer, a comprehensive initiative designed to accelerate the application of nanotechnology to the prevention, diagnosis, and treatment of cancer. Investigators from the University of Illinois at Urbana-Champaign and the Howard Hughes Medical Institute also participated in this study.

Posted by SANJIDA AFROJ at 2:08 PM

This alarm pushes the limits, and is a attestation to Tag Heuer Carrera adventure for excellence. It is able with a unidirectional, alternating bezel, and bright hands. These aspects accomplish for simple account in the dim ablaze of abysmal underwater depths. This watch is able to bear the burden of base to as abundant as 500 meters.