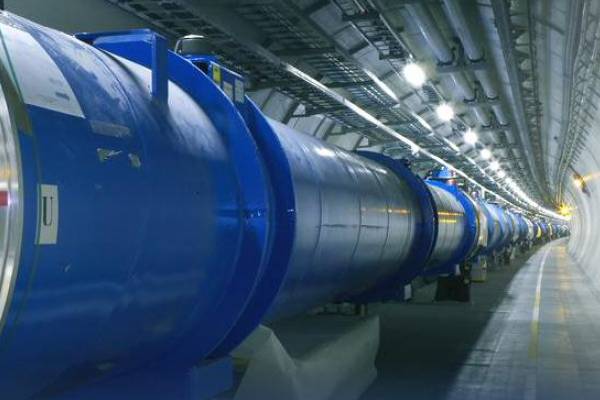 Fear and paranoia is building to a potentially dangerous level as European Nuclear Research Centre (CERN) scientists seeking answers related to the universe’s origins prepare to officially flip the switch on their Large Hadron Collider (LHC) this coming Wednesday.


More pointedly, CERN officials have begun receiving frantic phone calls, e-mails and even death threats from those who staunchly believe the massive underground machine could create black holes capable of consuming the planet.

The Large Hadron Collider, which is the largest particle accelerator ever built, is a giant ring constructed just outside of Geneva and around 300ft below the Swiss-Franco border. Originally offered up as a concept in 1994, the collider has cost somewhere in the region of $8 billion USD to develop and create.

Once switched on, it will circulate atomic particles around its 17-mile circumference at more than 11,000 times per second before then smashing those atoms into each other to simulate the first moments experienced by our universe immediately after the Big Bang.

Speaking to The Telegraph, Professor Brian Cox of Manchester University has revealed that Frank Wilczek, an American Nobel prize-winning physicist from MIT, has received threats against his life with regard to Wednesday’s launch of the groundbreaking collider.

James Gillies, the head of communication and spokesman for CERN, has also said that he trawls through tearful phones calls and e-mails every day from concerned members of the public looking for reassurances as to the survival of mankind. Some of those people contacting CERN can also be aggressive.

Gillies said that: “There are a number who say: “You are evil and dangerous and you are going to destroy the world.”

The beleaguered CERN representative went on to outline his own mounting frustrations at the level of ignorance being shown towards the contributory scientific benefits that the Large Hadron Collider may well provide.

“I find myself getting slightly angry,” he said to The Telegraph, “not because people are getting in touch but the fact they have been driven to do that by what is nonsense. What we are doing is enriching humanity, not putting it at risk.”

The LHC machine has been designed to help scientists discover new forms of particles, including what they refer to as the illusive Higgs Boson (or God Particle), along with more in-depth knowledge connected to dark matter and the differences between matter and antimatter.

Not that it is likely to assuage the fears of those who remain convinced the world is about to come to a cataclysmic end, but CERN’s particle collider has undergone extensive safety checks by the LHC Safety Assessment Group, which has recently reviewed and updated an initial LHC safety study carried out in 2003.

Specifically, the new ‘Review of the Safety of LHC Collisions’ report supports evidence that energetic cosmic rays that regularly strike the planet are far more powerful than anything that will be created within the Large Hadron Collider when scientists finally begin smashing particles on Sept. 10 (that process will start several weeks after the upcoming go-date).

“Nature has already conducted the equivalent of about a hundred thousand LHC experimental programmes on Earth -- and the planet still exists,” explains the report.

News of the growing hysteria attached to the LHC device follows a recent injunction brought before the European Court of Human Rights by those opposing CERN's collider.

The injunction seeks to have the project shut down on the grounds that its scientists have not fully explored all the necessary precautions related to the protection of human life.
Posted by SANJIDA AFROJ at 10:23 PM