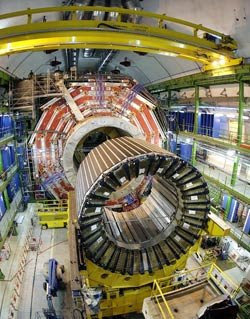 The Large Hadron Collider, which is run by the European Organization for Nuclear Research, lies in a 27-kilometre-long underground circuit beneath the French-Swiss border and is set to begin low-energy operations on Sept. 10.
It has attracted worldwide attention, in part because it has been a costly project, with a total budget of $9 billion. But it has also raised fears among the general populace about the potential dangers of such a large experiment.
Those fears are unfounded, wrote the safety assessment group for the LHC in a study published Friday. The safety group said its latest review should dispel fears of universe-gobbling black holes or anti-matter destroying the Earth.
If particle collisions like the ones created at the LHC had the power to destroy the Earth, such interactions would have wiped out the planet long ago, the group wrote Friday in the Journal of Physics G: Nuclear and Particle Physics.
"Nature has already conducted the equivalent of about a hundred thousand LHC experimental programmes on Earth – and the planet still exists," they wrote.
It's the second such study by the safety assessment group. The first study, published in 2003, came to similar conclusions.
The collider will use a ring of super-cooled magnets to push two proton beams to speeds and energies never before reached under controlled conditions, crashing the protons into one another to create and detect a host of new particles.
It is expected to be the most powerful tool yet for physicists hoping to uncover the secrets behind the laws of the universe, both on the tiny scale of quantum mechanics and the huge domain of galaxies and black holes.
Physicists from universities across Canada will be involved in the LHC's operations through the ATLAS experiment, one of two main experiments studying the results of proton-on-proton collisions.
On September 10th, scientists at the LHC will fire the first proton beams down the super collider. These proton beams will have a modest 450 GeV or less than one-tenth of the collider’s full strength and no collisions are expected because the beams will only be fired one way through the tunnel. Eventually CERN hopes the LHC help scientists discover the elusive Higgs-Boson particle by smashing together proton beams with 5-7 TeV worth of energy.Some scientists have theorized that such collisions could cause a miniature black hole to form and obliterate our planet, but such collisions in the form of cosmic rays have been occurring on Earth and other planets for a long time. In fact these collisions pack much more of a punch than anything the LHC can produce. However, this hasn’t stopped people from trying to stop the project.MIT professor and Nobel Prize winning physicist Frank Wilczek is just one of the scientists who has received death threats in the past days, according to the Telegraph UK.But for anyone who’s thinks the LHC will end the world, Professor Brian Cox of Manchester University said, “Anyone who thinks the LHC will destroy the world is a t***.” Hey wasn’t he supposed to use a more scientific word?
Posted by Unknown at 1:15 PM