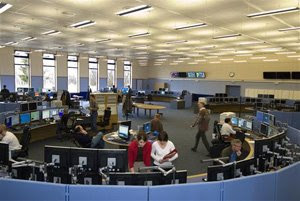 The LHC is the world’s most powerful particle accelerator, producing beams seven times more energetic than any previous machine, and around 30 times more intense when it reaches design performance, probably by 2010. Housed in a 27-kilometre tunnel, it relies on technologies that would not have been possible 30 years ago. The LHC is, in a sense, its own prototype.
Starting up such a machine is not as simple as flipping a switch. Commissioning is a long process that starts with the cooling down of each of the machine’s eight sectors. This is followed by the electrical testing of the 1600 superconducting magnets and their individual powering to nominal operating current. These steps are followed by the powering together of all the circuits of each sector, and then of the eight independent sectors in unison in order to operate as a single machine.

One of the most fascinating technological marvels of our time is scheduled to be fully turned on next week, amidst noticeable concern that the LHC unleashes uncontainable energies that eventually could result in the destruction of our planet.As it turns out, nature is the biggest proponent for the "no danger" argument cited by the IOP. There is a common and natural process whereby energetic cosmic rays striking Earth's upper atmosphere regularly produce the equivalent an LHC experiment. In fact, there have been more than 100,000 of them naturally on Earth. In addition, many of those collisions produced particles which exceed the energy potential of LHC.Researchers delving into the safety of the LHC point out there have been no "hypothetical black holes or strangelets, no vacuum bubbles or dangerous magnetic monopoles" even with the higher energy collisions. They do point out that the LHC's collisions will differ from those of high energy cosmic rays in that the LHC's generated particle velocity will be slower. They also state that the particle energy created by the LHC will be roughly the same as that of two mosquitos colliding. They state, "any black hole produced would be much smaller than those known to astrophysicists."The big concerns from watchdogs like Walter Wagner and Luis Sancho earlier this year, and the more recent and final hurdle, a collaborative effort by a group of concerned scientists overturned by the European Court of Human Rights in late August, reside in the unknowns. While the safety experts indicate that any potential black holes produced would be much smaller than those known to astrophycists, that unknown potential is exactly the complaint by the concerned parties.Barring some kind of last minute difficulty or challenge, the LHC is scheduled to go online Wednesday, September 10, 2008, the official "switch on" date. And as of right now it has already been used in low-yield tests and will continue to be right up until Wednesday carrying out what physicists describe as "massive" tests.
Posted by Unknown at 1:51 PM

The safety opposition argues that CERN is minimizing the danger and misrepresenting the facts.

A common argument is that cosmic rays prove safety, they do not. If cosmic rays create stable neutral micro black holes, all will travel through Earth.

If micro black holes are created by head-on collisions in particle colliders some percentage will travel too slowly to escape Earth's gravity.

The opposition includes visiting professor of Physics Dr. Otto Rossler who is famous for inventing Chaos Theory's Rossler attractor and founder of Endophysics. Dr Rossler theorizes that Hawking Radiation is not possible, micro black holes would grow exponentially over decades or centuries and CERN's cosmic ray arguments are flawed including failure to account for super fluidity of neutron stars.

The opposition argues that the Large Hadron Collider may be safe, it may be disastrous. Like launching shuttles in freezing weather, we should not launch until the safety or danger can be accurately calculated. Currently it can not.