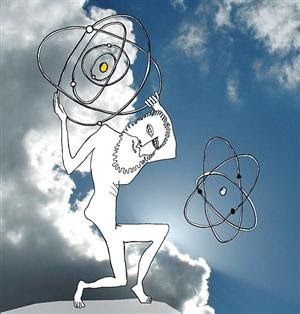 The eyes of the world are on Geneva, where scientists are expected to throw the switch this week on what may be the biggest experiment ever conducted.
Like Galileo's telescope, the LHC will give scientists new insight into a new world of the very small and, indirectly, of the very large. What will scientists see with the LHC? The machine's reach and sensitivity may well reveal a new world, a gift to the 21st century. What kind of world? Five centuries of hindsight make it possible to enumerate the implications of Galileo's telescope, but we have no such luxury with the LHC. How would a contemporary of Galileo's have been able to extrapolate from the telescope to the iPhone? In view of the understanding humans now have and the blending of the many worlds revealed by the many tools and instruments built since Galileo, will the LHC deliver surprises?
It had better. In this age of tight budgets, the LHC, a worldwide collaboration of thousands of scientists, engineers, students, has cost $8 billion, including significant pieces of national budgets. To appreciate what impact the LHC is likely to have in the coming decades, it's necessary to take a look at the fundamental questions it was built to answer. Only by venturing a few steps into the labyrinth of particle physics can we get a sense of how deeply this tool will look into the nature of the physical world.
It's certainly the most expensive. The European Organization for Nuclear Research, or CERN, has spent roughly $8 billion digging a 27-kilometer tunnel on the outskirts of the city and filling it with equipment that pushes the limits of technology—superconducting magnets that operate at close to absolute zero, the temperature at which atoms cease all movement, and can accelerate particles to energies not seen for 14 billion years, and instruments that can detect faint whispers of particles far smaller than atoms.
Probing more deeply than ever before into the stuff of the universe requires some big hardware. It also requires the political will to lavish money on a project that has no predictable practical return, other than prestige and leadership in the branch of science that delivered just about every major technology of the past hundred years.
Those advances came, in large measure, from the United States. The coming decades may be different. The Large Hadron Collider, as the Geneva machine is called, is a symptom of America's decline in particle physics and Europe's rise. Many scientists and educators fear that it also signals a broader decline in scientific leadership on the part of the United States.
placeAd2(commercialNode,'bigbox',false,'')

The LHC has transformed Geneva into something of a scientific mecca. According to CERN, more than 9,000 scientists have been working on the project, not only from nearby Europe but from countries as diverse as India, Russia, Japan, Israel and Turkey. Over the next few decades, they'll continue to arrive by train and by plane, stay in hotels and eat in restaurants, occasionally dangling their feet in the fountains of Lausanne. Not being a particularly freewheeling bunch, they will spend most of their time in the lab, relishing the data that will soon start pouring out of the instrument like a desert spring. Some will choose to live nearby—in Geneva, or perhaps France and Britain. Although particle physics is hardly a key driver of great economies, it is the most profound of intellectual challenges, embracing the most fundamental contradictions in science and attracting some of the best minds.
Europe's triumph over America isn't one of the talking points at the CERN press office. And for scientists, there's no percentage in offending the people they rely on for grants and for precious time to run their experiments on the collider. The project is represented as one of the greatest examples to date of international cooperation, which it may be. A third of the scientists working at the LHC hail from outside the 20 states that control CERN. America has contributed 1,000 or so researchers, the largest single contingent from any non-CERN nation. "CERN has always been enormously successful as an international collaboration," says Hans Boggild, a member of the CERN Council who plans to perform experiments on the collider. "This is a success both for Europe and the world."
A quick look at the numbers, however, reveals how far the United States stands to fall in leadership once the LHC goes live. The U.S. contribution amounts to $500 million—barely 5 percent of the bill. The big bucks have come from the Europeans. Germany is picking up 20 percent of the tab, the British are contributing 17 percent, and the French are giving 14 percent. Even the Bulgarians have chipped in less than 1 percent. Despite the U.S. dominance of recent decades in physics, most of the brainpower is European as well. "The contribution of the non-Europeans has been essential, but limited," says Els Koffeman, professor of particle physics at the University of Amsterdam.
Not long ago the United States seemed certain to stay on top. In the 1980s and early 1990s, 30 kilometers of tunnel was dug in Waxahachie, Texas, south of Dallas, to house the Superconducting Supercollider—a machine that was to be much like the LHC, but bigger and more expensive. President Ronald Reagan, calling the project a "doorway to a new world," agreed to foot the $8.4 billion price tag without help from international partners. Physicists spent years designing experiments in hopes of grants and big discoveries. In 1993, with $2 billion spent and cost estimates swelling to $11 billion, the project came to an abrupt end. The U.S. Congress, worried about budget deficits, pulled the plug.
In Waxahachie, the partially dug tunnel was plugged and filled with water. The town looked into using the site for a prison, a movie studio and a counterterrorism training facility before selling it to the J.B. Hunt trucking company as a data-storage center. Those plans were put on hold when the owner, Johnnie Bryan Hunt, died. A cavernous, windowless building the size of several Wal-Marts now sits abandoned in a patch of weeds.
The loss of the collider demoralized scientists and probably contributed to the decline in the popularity of physics, which by one study is now as unpopular among university students as it was when the Soviets launched Sputnik in 1957. The most worrying prospect is that scientists from other countries, who used to flock to the United States to be where the action is, are now heading to Europe instead. "Fewer students will come to the U.S.," says Peter Limon, a physicist at Fermilab in Illinois who is participating in a major LHC experiment. Fermilab's Tevatron, which until this week was the world's largest particle accelerator, has attracted Italian and Japanese scientists in particular, along with others from countries such as India. "They tend to stay. It is a major source of our intellectual ability in the United States," Limon says. "That will decrease."

Had the Texas project gone forward, says former director Roy Schwitters, who is now a professor of physics at the University of Texas at Austin, "the United States would be the major player in this rather than Europe." Many argue that the harm will extend beyond academia. "The fact that for many years most of this work was done in the U.S. has a lot to do with our position in the world," says physicist Jim Bensinger at Brandeis University in Boston.
In Europe, by contrast, scientists can hardly contain their enthusiasm. "I can't remember a time in recent history when there has been so much coverage" of particle physics, says Ken Peach, director of the John Adams Institute for Accelerator Science at Oxford and London universities. "From the point of view of attracting the brightest and best, these [experiments] are genuine magnets. I talk to graduate students in Oxford and they are tense in a very real way. They want to get their hands on the data."
Posted by Unknown at 1:38 AM