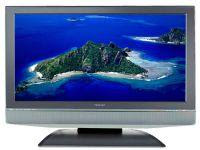 As part of the deal, Sharp will begin supplying Toshiba with LCD (liquid crystal display) panels of 32 inches from a new plant worth $380 billion, the company is currently building in Osaka, western Japan, and then use them to make LCD TVs to be sold under their brand, according to The Nikkei newspaper. In return, Toshiba will sell large-scale integration circuits (LSI) to Sharp. LSIs are key technology in image processing in LCD TVs.

Toshiba will procure panels from a 380 billion yen ($3.4 billion) factory being built by Sharp in Osaka Prefecture, western Japan, and then use them to make LCD TVs to be sold under its own brand.

Sharp and Toshiba said they would hold a news conference later on Friday at 0930 GMT on an alliance in the LCD business, but did not elaborate.

The Nikkei business daily reported earlier that Sharp will supply 40- to 60-inch LCD panels as part of an alliance that will also likely include stronger ties in image-processing chips, which Toshiba currently supplies to Sharp for use in its panels.

Shares of Sharp rose 2.3 percent to 1,944 yen by the midday break as investors welcomed the report of a large customer for its new plant. Shares of Toshiba gained 0.4 percent to 820 yen.