MARS glows like a light bulb at Chrismas eve :Except for a fat full moon 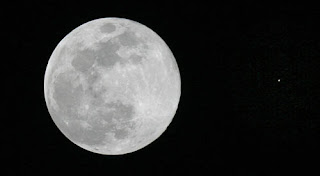 Chismas the spritual facts and the Most happiest event of World,,,We see again of the creation of GOD.
Nature will unwrap a heavenly present Christmas Eve: A rare celestial event that for once can be easily seen despite the glare of South Florida's unblinking lights.

Except for a fat full moon, Mars will be the biggest and brightest object in the sky Monday night. It won't be so large or luminous again until 2016, and it won't take as high a path across the sky until 2040. 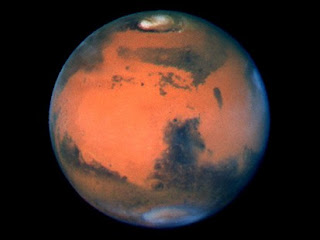 The red planet outsines the red-nosed reindeer this holiday. Although Rudolph may have a very shiny nose that glows like a light bulb, it's Mars that will glow in the sky on Christmas Eve.

"It's only 55 million miles away, which makes it brighter than the brightest star in the sky on Christmas Eve," said Jack Horkheimer, a Miami Museum of Science and Planetarium astronomer.

The planet Mars will be "at opposition" on Christmas Eve, meaning it will sit directly opposite the sun. It will be about as close and as bright to Earth as it ever gets.

"Plus it will be followed by a spectacular full moon," Horkheimer said. "They will track across the sky together all night long until sunrise Christmas morning."

The two celestial bodies will be highest in the sky at about midnight, which is primetime for Santa Claus. Horkheimer said they'll be so bright that Rudolph won't even be needed to guide St. Nick's sleigh tonight.

"Rudolph can just stay home and chill out at the North Pole this Christmas Eve," Horkheimer said.

So eager viewers who aren't experiencing a foggy Christmas Eve where they live can take a look outside tonight and see the red nose outshined by the red planet.
Posted by Md Moshiur Rahman at 7:05 PM