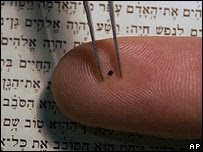 JERUSALEM -- Israeli scientists have inscribed the entire Hebrew text of the Jewish Bible onto a space less than half the size of grain of sugar.

The nanotechnology experts at the Technion institute in Haifa say the text measures less than 0.5 square millimetre surface. They chose the Jewish Bible to highlight how vast quantities of information can be stored in minimum amounts of space.

"It took us about an hour to etch the 300,000 words of the Bible onto a tiny silicon surface,'' Ohad Zohar, the university's scientific adviser for educational programs, told the Associated Press.

The Technion's microscopic Bible was created by blasting tiny particles called gallium ions at an object that then rebounded, causing an etching affect.

"When a particle beam is directed toward a point on the surface, the gold atoms bounce off and expose the silicon layer underneath just like a hammer and chisel,'' Zohar said.

Zohar said the technology will in the future be used as a way to store vast amounts of data on bio-molecules and DNA.

The tiny Bible appears to be the world's smallest.

The previous smallest known copy of the Bible measured 2.8 x 3.4 x 1 centimetres, weighing 11.75 grams and containing 1,514 pages, according to Guinness World Records spokeswoman Amarilis Espinoza. The tiny text, obtained by an Indian professor in November 2001, is believed to have originated in Australia.

Researchers in Israel say they have succeeded in putting a version of the Bible on a chip smaller than a pinhead.
Its 300,000 words in Hebrew were inscribed on a silicon surface at the Haifa Institute of Technology.

Scientists say the aim of the project is to increase young people's interest in nanoscience and nanotechnology.

"When we send the particle beam toward a point on the surface, the gold atoms bounce off of this point, thus exposing the silicon layer underneath," Ohad Zohar, one of the project's managers at Technion, said.

"By sending a particle beam towards various points on the substrate, we can etch any pattern of points, especially one that represents text."

The next step for Technion researchers is photographing the Bible and displaying it on a giant wall within the Faculty of Physics.

"Near this picture, the original - the nano-Bible itself, which is the size a grain of sugar - will be displayed."
Posted by Md Moshiur Rahman at 3:15 AM