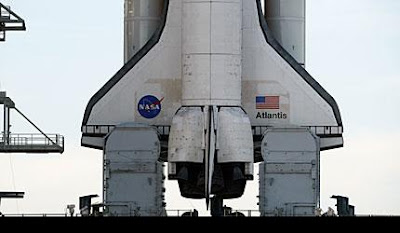 Fuel sensors force NASA to delay launch until Saturday,
NASA officials worried about tricky fuel sensor readings postponed a planned launch of the space shuttle Atlantis on Thursday, saying it could not go before Saturday at the soonest.

They said they believed a wiring problem caused two of four fuel tank sensors to fail and were trying to determine if it would be possible to either fix the problem or launch the mission safely anyway.

With less than a week of launch window left, NASA has decided to postpone the next attempted liftoff of space shuttle Atlantis to Saturday, after a recurrent fuel-sensor problem scrubbed Thursday's launch.
If Atlantis doesn't blast off before Dec. 14, it will have to wait until early 2008. NASA officials are eager for Atlantis to lift off this year because the shuttle's cargo, a European laboratory, is five years late getting to space.


Further complicating the launch, NASA managers are eager to extend Atlantis's 11-day mission. To do so, the shuttle would have to launch with nearly full fuel tanks. That becomes more difficult with every delay, because the fuel boils off as the spacecraft waits at the launch pad. Replenishing the fuel can take four days.

Extending the mission would let the crew inspect a troublesome joint on the International Space Station.

Shortly after Thursday's launch was canceled, NASA managers said they would try getting Atlantis off the ground today. Later, they opted to give engineers another day of troubleshooting. There's a 40% chance that Saturday's weather will force another delay.

The fuel sensors that forced Thursday's cancellation have delayed launches four times in the past two years. NASA chief Michael Griffin refers to them jokingly as "launch-prevention devices."

Four sensors form a backup system to monitor the amount of hydrogen fuel in the shuttle's giant orange fuel tank. During the loading of the shuttle's fuel Thursday, two of the four sensors gave erroneous readings during a routine test. Sensor malfunctions could have grave results:

•If the sensors signal that the tank is empty when it still contains fuel, the shuttle's engines would shut down and the spacecraft would not reach orbit.

•If the sensors indicate that the tank still has fuel in it when it is actually empty, the engines would keep running, potentially tearing the shuttle apart.
Posted by Md Moshiur Rahman at 2:23 PM