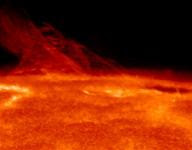 World scientist is looking for the ultimate source of power
The solar wind, which whips off the sun and blows past Earth and through the solar system, is unleashed by powerful magnetic waves in electrically charged gas around the sun, scientists said on Thursday.

The mechanisms that cause the solar wind had baffled scientists for decades, but were revealed in observations by a Japanese satellite called Hinode orbiting Earth, the scientists said in research published in the journal Science.

"The magnificent thing about the success of Hinode is its unprecedented view of the dynamics of the sun," Jonathan Cirtain, a solar physicist at NASA's Marshall Space Flight Center, Huntsville, Alabama, who helped in the research, said in a telephone interview.

The research was conducted by Japanese, European and U.S. scientists.

The solar wind is a stream of electrically charged gas -- mostly hydrogen -- blown outward from the sun in all directions at a speed of about a million mph (1.6 million kph).

It buffets planetary atmospheres. On Earth, it can disrupt satellites, power grids and communications, under certain circumstances. Earth's magnetic field protects against the solar wind, creating a bubble around which the wind must flow.

Driving the solar wind are so-called Alfven waves -- strong magnetic waves -- that ripple through the plasma of the sun's atmosphere, or corona, transferring energy from the star's surface and into the solar wind, the researchers said.

The waves are named after Swedish physicist Hannes Alfven, whose prediction of their existence helped earn him a Nobel prize in physics 1970. He died in 1995.

Hinode (pronounced hin-OH-day and named for the Japanese word for "sunrise") showed that two mechanisms appear to power the solar wind, Cirtain said.

The first involves the way the sun's magnetic field undergoes rapid changes in its shape, the researchers said. As the magnetic field changes shape, it generates these Alfven waves along its length that accelerate the charged gas and blow it into space, they said.

Another mechanism powering the solar wind involves the sun's chromosphere, the region sandwiched between the solar surface and its corona. Images from Hinode's Solar Optical Telescope found that the chromosphere is filled with Alfven waves, which when they leak into the corona are strong enough to trigger the solar wind.

"Until now, Alfven waves have been impossible to observe because of limited resolution of available instruments," Alexei Pevtsov, Hinode program scientist for NASA, said in a statement.

The Japan Aerospace Exploration Agency leads the mission, with cooperation from NASA and the European Space Agency.

Hinode has three key pieces of equipment -- the largest optical telescope to observe the sun from orbit, an X-ray telescope and an ultraviolet imaging spectrograph, making continuous observations of the sun.

The existence of the solar wind was first theorized about a half century ago. It existence was confirmed in the 1970s.
Posted by Md Moshiur Rahman at 2:39 PM