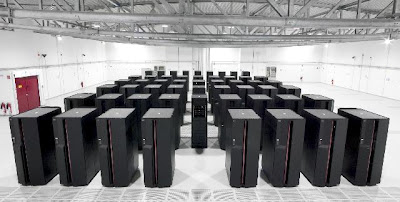 FRANKFURT (Reuters) - IBM (IBM.N: Quote, Profile, Research) says it has made a breakthrough in converting electrical signals into light pulses that brings closer the day when supercomputing, which now requires huge machines, will be done on a single chip.

In research published on Thursday in the journal Optics Express, IBM said it had produced electro-optic modulators 100 to 1,000 times smaller than comparable silicon photonics modulators and small enough to fit on a processor chip.

IBM on Thursday unveiled a technical advancement related to the use of light to carry large amounts of data quickly among cores within a microprocessor, taking the company closer to developing a chip that may one day run notebooks with the horsepower of today's supercomputers.
The breakthrough revolves around a device used to transform electrical impulses into beams of light. The device, called a modulator, is similar to what's used today in optical networks built by telecommunication companies. IBM scientists say they have found a way to shrink the modulator to a size where it can fit within a multi-core CPU.

The achievement, published in the journal Optics Express, is not all that's needed to one day bring data-carrying light beams to processors. However, it is an important first step toward production, which is about 10 to 15 years away, William Green, lead scientist on the project, told InformationWeek. "We've been working on this for sometime at IBM, and there's still a lot of work to do," he said. "It's one of the pieces within this larger network that we're designing and building."

The potential benefits of IBM's work to businesses and consumers are huge. For companies, it would mean having smaller computers that are far more powerful than today's machines, yet produce far less heat. Among the problems facing businesses today are the size and number of servers needed to process an ever-growing amount of data, which means larger expensive data centers. In addition, today's computers generate a lot of heat, requiring companies to spend more on power to cool them.

On the consumer side, a supercomputer in a box in the home could handle far more chores. Those tasks could range from operating lights and heating systems to processing and distributing video and more realistic computer games, which could include 3D environments in which characters move about seamlessly.

In the latest advancement, IBM has managed to shrink the modulator to a size in which one can be assigned to each core in a chip, a requirement in using light. Green expects to one-day see hundreds to thousands of cores on a single piece of silicon, so the size of the modulator is important. The latest device is 100 to 1,000 times smaller than previous versions in the lab.

Communications between processor cores today, which include quad-core chips from Intel and AMD, and IBM's nine-core Cell processor, is handled through copper wire that moves electrical impulses. IBM hopes to eventually replace that wire with a light beam that follows a tiny silicon strip, called a silicon nanophotonic wave guide, to its destination. Light carries more data in the same amount of time as copper by being 100 times faster.

But the bigger problem in eventually taking light-driven chips to market will be in manufacturing, Green said. Equipment and processes used today have evolved over decades around the use of copper. Introducing light technology means new equipment and a whole new way of production. Such a major transformation will take time. "That could be one of the primary challenges," Green said.
Posted by Md Moshiur Rahman at 1:56 PM