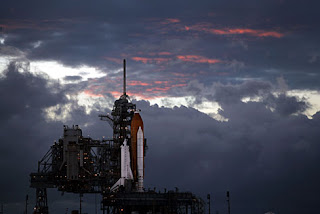 NASA postponed the launch scheduled for Thursday of the U.S. space shuttle Atlantis to resolve a fuel sensor problem but officials expressed hope they could make a second try on Friday.

Launch of the shuttle and Europe's Columbus science laboratory was retargeted for 4:09 p.m. EST Friday after two sensors in the shuttle's external tank failed a routine check early on Thursday.

Engineers believe the problem, which cropped up while the shuttle was being filled with fuel for the 8.5-minute sprint to orbit, was due to an open circuit.

Dec. 6 — NASA officials delayed the launch of the space shuttle Atlantis for at least 24 hours today following problems with a pair of fuel sensors.

Technicians were about 80 percent finished with loading 500,000 pounds of propellants into the shuttle’s large external fuel tank when tests indicated problems with two of four sensors at the base of the liquid hydrogen section of the tank.

Since flight rules require that at least three of the four sensors be working to launch, officials at the Kennedy Space Center in Florida scrubbed the flight for the day and began preparations to try again on Friday.

Atlantis and its crew of seven had been scheduled to left off at 4:31 p.m. today on a mission to deliver a large European science laboratory called Columbus to the International Space Station. Weather conditions were close to ideal and no major technical problems had emerged prior to the fuel sensor issue.

“Of course, we’re a little disappointed in the events today,” said Launch Director Doug Lyons. “But we’re certainly working to resolve our issues and make an attempt as soon as we possibly can.”

Mr. Lyons said a preliminary analysis indicated that the problem involved an open electrical circuit somewhere in the sensor system and that it might not be in the sensors themselves. Technicians were trying to locate the source of the problem to determine if it could be resolved to make another launch attempt on Friday at 4:09 p.m., he said.

Weather forecasters are predicting favorable conditions for a Friday flight.

The shuttle’s fuel tank will be drained and mission managers are to meet later this afternoon to determine the nature of the problem and when next to try to launch Atlantis.

The fuel sensors are part of a backup system that ensures the shuttle’s three main engines do not cut off too soon or burn too long during launch. Premature cutoff during the more than eight-minute dash to space could cause the shuttle to fail to reach orbit and having the engines keep running if fuel is exhausted could result in a disastrous explosion, experts said.

NASA previously experienced problems with the fuel sensors on several flights following the Columbia disaster in 2003, when the shuttle system went through numerous modifications. The sensors caused a two-week delay in July 2005 of the first flight after Columbia and again caused a mission postponement in September 2006.

The primary goal of Atlantis’s scheduled 11-day mission is to install the European Space Agency’s new Columbus laboratory to the growing station. The 22,700-pound module, measuring 23 feet long and 15 feet in diameter, will significantly increase the station’s research capability and represents the chief European contribution to the international project.
Posted by Md Moshiur Rahman at 3:01 AM