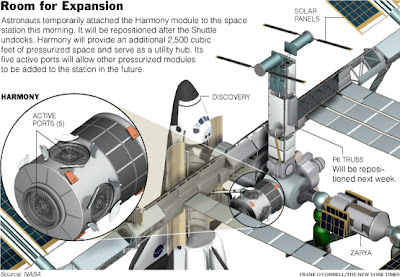 24hoursnews
The US space shuttle Discovery linked up with the International Space Station (ISS) yesterday on a mission to prepare the orbital outpost for new European and Japanese laboratories.
With shuttle commander Pamela Melroy at the controls, Discovery eased up to the station and latched onto a docking port at 8.40am EDT.
Working both outside the station and within it, the astronauts moved the Harmony module, which will serve as a connection point for two new laboratories for the station, to a temporary location on the side of the station.
The space station’s robot arm, operated by Stephanie Wilson and Daniel Tani, smoothly moved the 16-ton module out of the shuttle and onto the station, where automatic bolts secured it in place in a temporary home on the left side of the station’s living quarters.

The work outside was more strenuous. Astronauts Scott E. Parazynski and Douglas Wheelock began their spacewalk shortly after 6 a.m. Eastern time. They prepared the Harmony module for its removal from the shuttle’s payload bay and performed some of the preliminary work for the other big task of the mission, moving an enormous set of solar arrays and the truss they stand on from their initial position atop the station to the permanent home on the far end of the truss on the station’s left side.

So far, technical difficulties on the mission have been minor.

So little insulating foam was shed from the shuttle’s external tank that mission managers have determined that a more focused inspection of the shuttle’s heat shield is unnecessary. When that word was passed up to the shuttle on Thursday afternoon before the crew sleep period was to begin, the shuttle commander, Pamela A. Melroy, responded enthusiastically, ”Oh, man, that is fantastic news.”

She said that it was a relief to know that tile and panel damage was not a concern and that they would be able to take the time that would have gone to inspection and use it to further prepare the Harmony module for entry. “We just can’t wait to get inside,” Ms. Melroy said.

The spacewalk, for the most part, went smoothly. The astronauts struggled occasionally with balky bolts and hose connectors, which are optimistically called “quick-disconnect” devices. They were wary of the small amounts of frozen ammonia that drifted away from some the hoses, because they could contaminate the atmosphere within the station if brought in on the space suits. The amount of ammonia, which is used as a coolant, was small.

At one point, Paolo Nespoli, the Italian astronaut who was coordinating the spacewalk from inside the station, asked his colleagues to take a small break to enjoy what might be the greatest perk of working in space: the view. He asked them to look over the starboard side as the station passed over Houston.

The two spacewalkers oohed and aahed as the familiar coastline slid by below.

The spacewalkers were back in the airlock before noon.

Over the communications system, Ms. Melroy congratulated Dr. Parazynski and Mr. Wheelock on the work of the entire team, which she said she watched while making lunch for the crew.
Posted by Md Moshiur Rahman at 3:08 AM