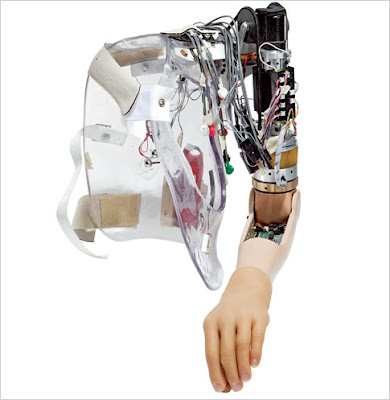 A man who lost both of his arms in an accident is getting some high-tech help with an innovative artificial limb that controls movements by thought.

Two years ago, a healthy Jesse Sullivan, 56, was at his job repairing utility lines when he accidentally touched a live wire, costing him both his arms up to his shoulders.

Like most amputees, Sullivan was fitted with a traditional artificial prosthesis, relying on chains and buttons to move his arm. But then doctors at the Rehabilitation Institute of Chicago offered a "bionic" arm for his other lost limb, putting him at the forefront of biomechanical technology.

"I didn't really didn't know what was available. It was a scary thing," Sullivan remembers. "I thought maybe it would be like the 'Six Million Dollar Man' [on TV]."

To get the new arm, Sullivan first underwent surgery to graft existing nerve endings from his shoulder onto the pectoral muscle on his chest. Those nerves grew into the muscle after about six months. Electrodes on the graft can now pick up any thought-generated nerve impulses to the now-absent limb and transmit those to the mechanical prosthesis, controlling the movements of the arm.

Sullivan's doctor says this is the first time a nerve-muscle graft has been used to control an artificial limb.

Now, when Sullivan thinks about closing his hand, the nerve that used to make the hand close spurs a little piece of his chest muscle to contract, said Dr. Todd Kuiken, one of Sullivan's doctors at the Rehabilitation Institute of Chicago. Sensors over that muscle then tell the hand to close via tiny connecting wires.

"This is 1920s surgery but it's for a 21st century application," said Kuiken. "So what's really novel about this is not so much the surgical technique but the reason for doing the surgery and using it to help control artificial limbs and make them work better."

New wave technology
Some researchers have used electrodes implanted in the brain or in the scalp, while others have experimented with detectors outside the body, such as in Sullivan's case. But the basic idea behind neuroprosthetic devices is the same: creating communication between the brain and the outside object that needs to be moved.

"To move something, you have to get a command signal from the brain to [an object,] whether it's a wheelchair, robot or your own arm," explains Dr. Brian Schmit, an assistant professor of biomedical engineering at Marquette University.

The technology has the possibility to dramatically change those that have lost limbs or who are paralyzed. Some of the thought-driven devices being developed could navigate wheelchairs, control a robotic arm's movement, or even move a computer mouse, according to Schmit.
"If you can provide to someone who can't move access to a computer, it opens a lot of doors," Schmit says. "The brain can change to new circumstances. The body has an amazing ability to learn and adapt."

About 8 percent of the estimated 387,500 amputees in the United States are those that have lost their arms, according to the Northwestern University Prosthetic-Orthotic Center.

"With these new prostheses, these patients can now use their nerves in the natural way to control their artificial hand so that you have a more natural feel to its use," Kuiken said. "It's faster and more agile."

For now, the medical procedure performed on Sullivan is limited to amputated arms. The hope is that one day it can be applied to other limbs as well.

Sullivan said the experimental surgery was worth the uncertainty at first if it can help others later.

"If this benefits another person then it is well worth it," Sullivan said. "And it has benefited me so I'm well satisfied."
Posted by Md Moshiur Rahman at 9:36 PM