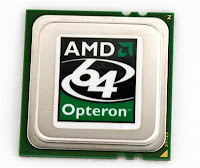 The announcement was a surprise, coming just a week after the major launch by AMD of its four-core processor, code-named "Barcelona."

It also goes against the industry tradition of doubling processing power with each new design. Single-brain microprocessors are giving way to dual-core ones, followed by quad-core, with eight cores due next from Intel.

"We believe triple-core is the right product at the right time to serve a broad swathe of the market," said Bob Brewer, head of marketing and strategy for AMD's PC platforms.

"There's a space for it, it makes sense, it's naturally going to resonate with consumers."

AMD is still planning to introduce its "Phenom" quad-core processor for desktop PCs in December, but it will follow up with a triple-core version in the first quarter of next year.

"If the choice is say $200 for a dual-core [processor] and $400 for a quad-core, then if you can get $300 for a triple-core, it's like free money," said Nathan Brookwood, analyst with the Insight64 research firm.

AMD told reporters that the choice of single, dual, triple and quad-cores would simplify its product lines for consumers, who were confused by comparisons between clock speeds and the size of memory caches on the chips.

Mr Brewer said a triple-core chip would work well for example on a PC where a user was playing a video game such as Bioshock, which utilised two cores, and where an anti-virus programme ran at the same time using the other core.

Advanced Micro Devices on Monday confirmed that rumors of a triple-core desktop chip on its roadmap are true. The chip, which will be part of AMD's new Phenom desktop processor brand, will be released sometime in the first quarter of 2008, according to AMD executives.
It appears that Phenom, the new brand initially believed to be built solely around AMD's first quad-core desktop chip due out in December, will be marketed to enthusiasts, OEMs and the custom system builder channel in both mid-range, triple-core and high-end, quad-core flavors.

"Triple-core is the mid-range product for 2008," said AMD marketing VP Bob Brewer at a press lunch Monday in San Francisco.

Asked if most consumers wouldn't just opt for the full quad-core if they were upgrading from dual-core, Brewer said AMD believes a mid-range multi-core product could attract budget-conscious shoppers. He said that while technologists and industry experts might not grasp the value of a triple-core processor, that "this is something that naturally resonates with consumers."

"They see, quite simply, that 'n-plus-one' is better than just 'n'," Brewer said.

AMD had ample motivation to announce the triple-core Phenom news when it did. Internet rumors began building into a storm over the weekend. And Brewer admitted that the Sunnyvale, Calif.-based chipmaker wasn't averse to taking some of the spotlight away from its main rival, Intel, on the eve of the Intel Developers Forum at San Francisco's Moscone Center.

The triple-core announcement seems like a particularly opportunistic stab at the Santa Clara, Calif.-based chip leader. Though Intel came out with its quad-core product last December, its current chip architecture makes the production of a triple-core chip impossible. AMD, with its native multi-core design featuring independent power supplies to each individual core on a die, can and apparently will produce one sometime early next year.
Posted by Md Moshiur Rahman at 11:02 AM