Sony's Social Networking Site Needs a Name
The consumer electronics giant tests an interactive community site in connection with CES.
Sony has come up with a novel way to get users involved in its new community Web site -- help name it.

In conjunction with this week's Consumer Electronics Show (CES) in Las Vegas, Sony Electronics unveiled a beta testing version of a new interactive community site. The as-yet-unnamed site will include Sony company blogs, videos, photos and polls, as well as profiles of its users.

The company also said its new site would tie into its existing social networking site and forum, the Backstage 101, and the ratings and reviews on its retail site, sonystyle.com.

One immediate test of the site's popularity and usefulness will be the CES tie-in. Sony said the site will include information on the latest product announcements and show activity as well as interaction with its chief blogger and senior vice president of corporate communications, Rick Clancy and fans of the company's products.

Sony's moves come at a time of exploding interest in social networks both for internal and customer-facing uses.

"The Sony blog has enabled us to speak frankly and directly with our customer base and the public at large, not only in the U.S. but around the world," Clancy said in a statement. "Now we're looking to make the blog the cornerstone of a more interactive community site that provides people with the opportunity to talk to us and to each other about their opinions, experiences and observations with respect to Sony, our products, the industry and even our competitors." 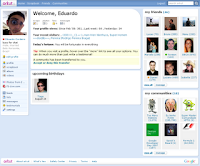 "Sony No Baloney"
A Sony spokesperson said the electronics giant plans to add more company bloggers, avatars and other features. Users will be able to add profiles and photos by the end of the month, but the company made the beta launch a priority for CES. "We want to get feedback from users and also we thought it would be great to reach out to users for suggestions on a name for the site," she said.

Clancy said he already has some ideas. "My favorite so far is Sony No Baloney,'
which I used for the very first blog post, but some of my colleagues disagree," he said. "Hopefully, the community members themselves can suggest something more clever."