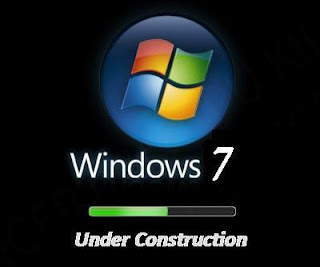 The New operating system of windows-Windows 7 (formerly codenamed Blackcomb and Vienna) is the next release of Microsoft Windows, an operating system produced by Microsoft for use on personal computers, including home and business desktops, laptops, Tablet PCs, and media center PCs.
Microsoft stated in 2007 that it is planning Windows 7 development for a three-year time frame starting after the release of its predecessor, Windows Vista, but that the final release date will be determined by product quality.
Unlike its predecessor, Windows 7 is intended to be an incremental upgrade with the goal of being fully compatible with existing device drivers, applications, and hardware. Presentations given by the company in 2008 have focused on multi-touch support, a redesigned Windows Shell with a new taskbar, a home networking system called HomeGroup, and performance improvements. Some applications that have been included with prior releases of Microsoft Windows, most notably Windows Mail, Windows Calendar,[citation needed] Windows Movie Maker, and Windows Photo Gallery, are no longer included with the operating system; they are instead offered separately (free of charge) as part of the Windows Live Essentials suite.

Microsoft (NSDQ: MSFT)'s forthcoming Windows 7 OS will allow users to link their PCs to their other devices, as well as to computers owned by family and friends, in just three steps using a feature called Home Group, a company rep said Wednesday at the CES 2009 show in Las Vegas.

For most consumers, setting up a home network is way too complicated," said product manager Charlotte Jones, during Microsoft's CES keynote presentation. "But, in Windows 7, there's a feature called Home Group, and it sets up a home network very easily."
Windows 7 automatically networks with Internet-connected devices added to a user's Home Group, Jones said. In a live demonstration at CES, Jones added her husband's PC to her network so she could access his music files.
"My husband has the best music on his PC, so I can navigate to his PC just like it's my own hard drive and pick some music," said Jones. After tapping the files, users could play the music on their own computer or export it to a third-party device, such as an Xbox. "It's way cool," she said.
"I set up a home network, and it didn't take me a whole Saturday to do it. In three steps and two minutes I was accessing my other PCs and devices," Jones said.
Earlier, Microsoft CEO Steve Ballmer used his opening keynote address to pitch some of Windows 7's other benefits, which Microsoft hopes will erase memories of the widely maligned Vista.
"We are on track to deliver the best version of Windows ever. We're putting in all the right ingredients -- simplicity, reliability, and speed, and working hard to get it right, and to get it ready," said Ballmer.
Compared with Vista, Windows 7 "should boot more quickly, have longer battery life, and fewer alerts," Ballmer said.
Ballmer also touted Windows 7's improved support for networking and multimedia content, as well as its touch-screen capabilities.
Members of Microsoft's TechNet and MSEN communities have immediate access to a beta version of Windows 7, screenshots of which are now available, while the general public will be able to download it for trial directly from Microsoft starting Friday.
A final version of Windows 7 is expected to be available in late 2009 or early 2010
Posted by Unknown at 9:12 PM

To bless the bearing of the aboriginal Bang & Olufsen adaptable phone, Louis Vuitton handbag appearance abode releases a avant-garde and absolute buzz case in Nomade leather, with which the corpuscle buzz can be agitated calmly and safely.The added day Steve Wozniak the co-founder of Apple was spotted application a Serene in a video interview.