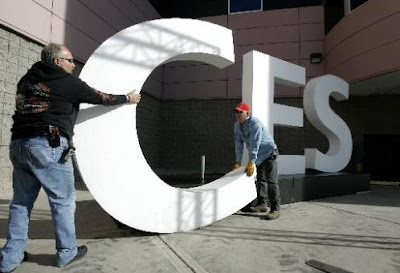 The bad economy hasn't put that much of a crimp on the show, however, which organizers believe will bring about 130,000 visitors to Las Vegas, down from about 140,000 who came last year, CES officials said. But the trade show is among the livelier events in this party town, which appears fairly quiet, judging by the number of mostly empty gambling casinos.

But CES officials put a good face on matters during a presentation to reporters yesterday. The long-term trend in the U.S., going back to the 1960s, shows that consumers are continuing to spend more of their money on technology products such as cell phones, TVs and laptops as a percentage of their total spending on durable goods, they said.

Last year, 17% of total consumer spending on durable goods, which includes washing machines and automobiles, went to electronics, up from the single digits in the 1970s, said Shawn DuBravac, an economist for the Consumer Electronics Association in Arlington, Va., the group sponsoring CES.

DuBravac was realistic about the dreary economic outlook for 2009, but noted that consumer technology spending will fare better than other segments of the economy. "2009 will remain a very bad year," he said, and estimated that the current recession started in December 2007 and should last through June 2009. "In 2010, we start to get back on track," he said.

Still, periods of economic downturn can help spur innovation, DuBravac noted, pointing out how the founders of Google Inc. bought surplus servers off the backs of trucks after the Internet bubble burst in 2001. In technology fields, the newly unemployed "can be the ones who get the new ideas" and put them into practical technologies. "We could see tremendous innovation in the next five years," he said.

While the recession will have an impact on electronics and audio products sold in cars and digital TVs sold for homes, smart phones will continue to be a strong product segment, DuBravac and Loenig said. Netbooks, which emerged in 2007, hit 10 million units sold in 2008, and will mushroom to 18 million in 2009, they said.

Of all consumer electronics purchased, cell phones, including smart phones, are the biggest sellers, and had about $23 billion in sales in 2008, CES officials said. In the U.S., about 124 million units should ship this year, DuBravac said, an increase of 2.6% over 2008.

Cell phones and smart phones are devices that bring together all the innovations of electronics technology, because of users' desire to work or play anywhere, said Tim Herbert, a global analyst for CEA. He estimated that cell phones represented about 27% of the worldwide consumer electronics market in 2008, while laptops were 11% of the total.

Mobile phones innovations include provisions for connections to faster networks with a range of applications, but also innovations for user needs. As one example, Koenig noted that LG Electronics will be announcing a wristwatch phone at CES. (LG confirmed the device would be shown after the show opens.)

Globally, consumer electronics products should result in total retail sales of $724 billion in 2009, up from $694 billion in 2008, Herbert said. About 2.5 billion electronics products were sold in 2008, he added.
Savior For Traditional TV Companies
The Consumer Electronics Show can only do so much for traditional TV/entertainment content players looking to extend their businesses. In the next few days, at the CES annual get-together, maybe we'll find out how much.

One end of the TV spectrum -- the home video business -- isn't complaining too much, as 2008 looks to be down "just" some 3% to 4% from 2007's $15.38 billion in sales. Yet those fancy new Blu-ray units and discs aren't enough to compensate for the downturn of the standard definition DVD business.

Compared to numbers for other TV-related businesses, all these declines aren't all that bad -- not when there are "double digit percentage" declines in network TV viewership, in local advertising TV sales, and in most media companies' stock prices.

For a couple of years now -- ever since Disney/ABC made that historic iTunes deal -- CES has been seen as a savior for some TV companies looking for new distribution streams of revenue. But this year the number of media and entertainment content companies taking floor space has been stagnant, if not in decline. NBC Universal, Discovery Networks, Sony Entertainment, and Comcast's G4 Network will have a presence at the event.

The CES poster child has been Sony Entertainment -- one of those perfectly positioned TV producer/consumer device companies -- which now seems to be having a rough go of it, according to reports. Recently, the Times of London suggested Sony will undergo a massive restructuring soon -- some $1.1 billion in cuts, and 16,000 jobs.

Who can blame the company if this happens? Sony has been hit squarely like any other consumer products company -- with consumers pulling back on new high-end consumer media products, such as Sony PlayStation 3 game console and Bravia flat screen TVs.

So, in retrospect, those home video executives are feeling pretty good, in these economically troubled times, with comments like "down is the new flat" or "flat is the new up."

What, then, should we make of media businesses that gained in 2008 -- like Netflix or Marvel Entertainment, both of whose stock prices grew? Is "up' the new "hit," the new "Idol," the new Google"? Or is the new "up," the new poster child looking for eventual trouble, just like everyone else?
Posted by Md Moshiur Rahman at 12:02 AM

The incorporation of gemstones in to Replica Watch Store designs such as diamonds lends itself more towards ostentation yet appealing to a particular group of people.So watches are everything to everyone, basic models, creative technology as well as gold encrusted specimens are available for purchase.