A.M.D. will focus on design and let other worry about the actual production. 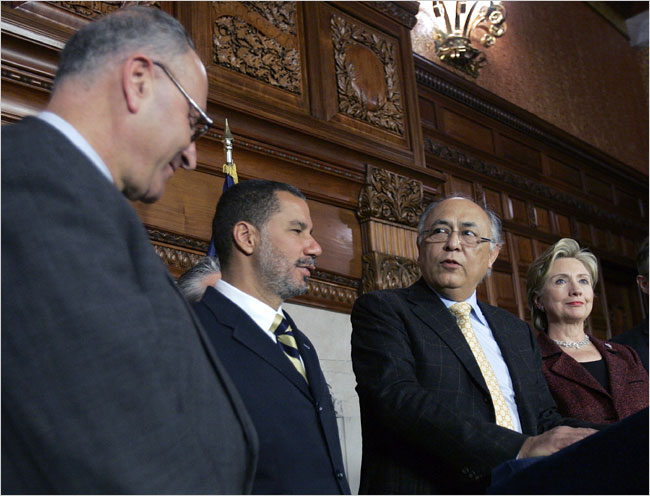 Senators Charles E. Schumer, left, and Hillary Rodham Clinton, with Gov. David A. Paterson of New York, second from left, and Hector de J. Ruiz, chairman of Foundry, on Tuesday in Albany. Foundry is a spinoff of Advanced Micro Devices.
ADM announcing Tuesday that it will spin off its manufacturing operations in a multi-billion dollar joint venture with a newly formed high-tech investment company created by the government of Abu Dhabi. ADM would spin off its computer-chip factories into a separate company.
Like most other companies in the semiconductor industry, A.M.D. will focus on design and let other people worry about the actual production.
The Advanced Technology Investment Company, an organization created by the Abu Dhabi government, has agreed to invest up to $8 billion in A.M.D.’s factory spinoff and will receive a 55.6 percent stake in the entity, which has been temporarily named the Foundry Company. Foundry will initially make chips just for A.M.D. but will eventually compete for other customers.
Why would an investment company with virtually no technology experience, located halfway around the world from Silicon Valley, bet billions of dollars that it can conquer one of the world’s toughest businesses?
One reason is that Abu Dhabi wants to be treated as a serious technology player, said Waleed al-Mokarrab, chairman of Advanced Technology. “This is the first of what I hope will be over time a deep group of technology-intensive businesses that we invest in.”
Under terms of the deal, Advanced Technology will fund the manufacturing company with an initial $2.1 billion and then contribute up to $6 billion more — most of which will go toward improving A.M.D.’s existing chip plants in Dresden, Germany, and building a new $3.2 billion facility near Albany, N.Y.
A.M.D., based in Sunnyvale, Calif., will retain ownership of 44.4 percent of the new entity. A.M.D. will also sell a $314 million stake in the presplit company to a separate Abu Dhabi investment firm, Mubadala Development.
This outlay of capital will help A.M.D. escape the burden of funding pricey chip plants as it competes with its much larger rival, Intel, to sell the key chips that run personal computers and corporate servers. Over the past couple of years, A.M.D. has crumbled under the pressure of keeping up with Intel, posting seven consecutive quarterly losses.
A.M.D. shareholders were so pleased by the spinoff Tuesday that they drove shares up 8.5 percent to $4.59 even as other tech stocks fell in the market sell-off.
A company building a state-of-the-art plant today can expect to pay $3.5 billion to $4 billion for the facility, said Thomas Sonderman, A.M.D.’s vice president of manufacturing technology.
Worst of all, companies usually need to invest in at least two plants of this scale to deal with seasonal fluctuations and changes in manufacturing technology, and to keep both plants at close to 100 percent capacity in order to turn a profit.
“Intel, Samsung and a couple of other memory makers are really the only companies who can keep two or more factories full,” said Dean McCarron, an analyst at Mercury Research, a firm specializing in semiconductors.
The Advanced Technology cash infusion will allow the Foundry to upgrade one of the Dresden plants so that it can be used to make cutting-edge processors for a wide variety of companies within a year. A top priority will be to adapt the plant to bid for A.M.D.’s graphics chips business. Taiwan Semiconductor Manufacturing, one of the leading contract chip factories, makes those products today.
Down the road, Foundry hopes to leverage a technology alliance with I.B.M. to woo even more customers. I.B.M. has formed semiconductor partnerships with Toshiba, Samsung, Sony and others — all of whom could turn to Foundry for extra capacity.
Traditionally, foundries, which contract to make processors for other companies, have been one or two generations behind the technology in factories owned by companies like Intel that design and produce their own products.
One of Foundry’s big advantages will come from inheriting A.M.D.’s manufacturing technology, which is closer to that of Intel than the major foundries.
According to analysts, this recipe could result in a profitable business for Foundry and a technology coup for the Middle East.
“There has been a large weeding-out process in this industry, so this is bringing a core, proven set of technology to the region,” said Kevin Cassidy, an analyst at Thomas Weisel Partners.
The deal still comes with its challenges both procedural and social. New York State, for example, is reviewing the process for transferring $1.2 billion in incentives for the new chip plant to Foundry from A.M.D.
In addition, the Committee on Foreign Investment in the United States must approve the transaction for it to be complete.
Posted by Unknown at 11:06 AM