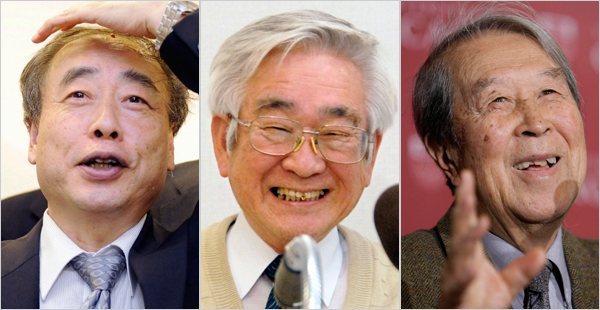 Makoto Kobayashi, left, and Toshihide Maskawa, both of Japan, and Yoichiro Nambu, of the University of Chicago’s Enrico Fermi Institute, received the Nobel Prize in Physics on Tuesday

An American and two Japanese physicists on Tuesday won the Nobel Prize in Physics for their work exploring the hidden symmetries among elementary particles that are the deepest constituents of nature.their discovery of tiny breaks in the symmetry of nature's fundamental particles that help explain why our universe exists and the rules that govern it.

Physicists had thought that it would be possible to replace all particles with their antiparticles in an experiment, or to run the experiment in reverse, and have the same result. But it turned out there were subtle differences. The idea of a third family of quarks, which could account for the violation of symmetry, arose with the work of Italian physicist Nicola Cabibbo and was cemented by Kobayashi and Maskawa.

Some Italian physicists said yesterday that they were upset about the perceived snub of Cabibbo.

"I'm happy that the Nobel Prize has been awarded in this area of physics," Roberto Petronzio, president of the Italian Institute for Nuclear Physics, told La Repubblica, an Italian newspaper. "Nevertheless, I can't deny that I'm bitterly disappointed by this particular award: The only contribution that Kobayashi and Maskawa made was to simply expand upon a core idea whose father was the Italian physicist Nicola Cabibbo."

Kobayashi and Maskawa, meanwhile, reacted to the award without much excitement.

Yoichiro Nambu, of the Enrico Fermi Institute at the University of Chicago, will receive half of the $1.4 million prize for work he did nearly half a century ago. The other half will be split between Makoto Kobayashi, of the High Energy Accelerator Research Organization in Tsukuba, Japan, and Toshihide Maskawa, of the Yukawa Institute for Theoretical Physics at Kyoto University.
The Royal Swedish Academy of Sciences, which presents the award, said the three "give us a deeper understanding of what happens far inside the tiniest building blocks of matter."
The three physicists were pioneers in understanding cases where symmetry in nature is broken in subtle but crucial ways.
One of the most vital asymmetries in the cosmos, the balance between matter and antimatter, explains why the universe looks the way it does. Matter and antimatter are similar, but opposites: An electron carries a negative charge, while its antiparticle, the positron, is an electron with a positive charge. When the two collide, they annihilate each other.
In a symmetric universe with an exactly equal amounts of matter and antimatter, life -- if any could exist -- would be nasty, brutish and short. But physicists believe that at the time of the big bang, 13.7 billion years ago, there was one extra particle of matter for every 10 billion antimatter particles. The leftover matter composes the stable, apparently matter-dominated universe we live in. Why this happened is a mystery.
Nambu, 87, said in an interview yesterday that he came to the United States from Japan in 1952, arriving at Princeton's Institute for Advanced Study, where he crossed paths with J. Robert Oppenheimer, the scientific head of the Manhattan Project that built the atomic bomb, and Albert Einstein, whose theory of relativity is still a fundamental foundation of physics.

Nambu's mathematical work on "spontaneous symmetry breaking" began in 1960. It now undergirds the Standard Model, which describes three of the fundamental forces of nature: the strong nuclear force, weak nuclear force and electromagnetic force.
Physicists hope to explain the roots of these forces when they restart the new Large Hadron Collider, a massive atom smasher in France and Switzerland, next year.
"I was surprised to hear the news," Nambu said. "I'd been told that I was a candidate for many years now, but I didn't expect this to happen at this particular time."
Steven Weinberg, a professor of physics and astronomy at the University of Texas at Austin, said: "The award to Nambu, I think, is long overdue. He was the first one to realize the importance of this phenomenon."
Kobayashi, 64, and Maskawa, 68, predicted in 1972 that there were three families of quarks, instead of the two then known. (Quarks and leptons are considered the two basic components of all matter, and make up atomic particles.) Their calculations were confirmed by experiments in high-energy physics, leading to the discovery of the charm, bottom and top quarks, three of the six known today
Posted by hybrid at 12:12 PM