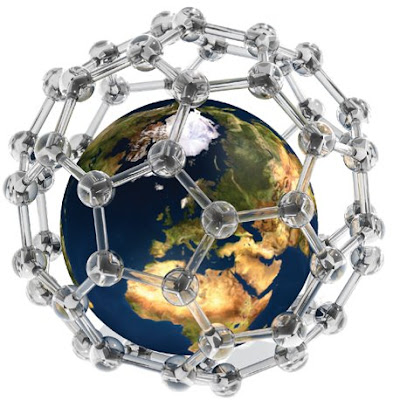 Below we list some key current and potential shortand long-term applications of nanomaterials. Most current applications represent evolutionary developments of existing technologies: for example, the reduction in size of electronics devices.


c) Magnetic Materials
It has been shown that magnets made of nanocrystalline yttrium–samarium–cobalt grains possess unusual magnetic properties due to their extremely large grain interface area (high coercivity can be obtained because magnetization flips cannot easily propagate past the grain boundaries). This could lead to applications in motors, analytical instruments like magnetic resonance imaging (MRI), used widely in hospitals, and microsensors. Overall magnetisation, however, is currently limited by the ability to align the grains’ direction of magnetisation.
Nanoscale-fabricated magnetic materials also have applications in data storage. Devices such as computer hard disks depend on the ability to magnetize small areas of a spinning disk to record information. If the area required to record one piece of information can be shrunk in the nanoscale (and can be written and read reliably), the storage capacity of the disk can be improved dramatically. In the future, the devices on computer chips which currently operate using flows of electrons could use the magnetic properties of these electrons, called spin, with numerous advantages. Recent advances in novel magnetic materials and their nanofabrication are encouraging in this respect.
d) Medical Implants
Current medical implants, such as orthopaedic implants and heart valves, are made of titanium and stainless steel alloys, primarily because they are biocompatible. Unfortunately, in some cases these metal alloys may wear out within the lifetime of the patient. Nanocrystalline zirconium oxide (zirconia) is hard, wearresistant, bio-corrosion resistant and bio-compatible. It therefore presents an attractive alternative material for implants. It and other nanoceramics can also be made as strong, light aerogels by sol–gel techniques. Nanocrystalline silicon carbide is a candidate material for artificial heart valves primarily because of its low weight, high strength and inertness.
e) Machinable Ceramics
Ceramics are hard, brittle and difficult to machine. However, with a reduction in grain size to the nanoscale, ceramic ductility can be increased. Zirconia, normally a hard, brittle ceramic, has even been rendered superplastic (for example, able to be deformed up to 300% of its original length). Nanocrystalline ceramics, such as silicon nitride and silicon carbide, have been used in such automotive applications as high-strength springs, ball bearings and valve lifters, because they can be easily formed and machined, as well as exhibiting excellent chemical and high-temperature properties. They are also used as components in high-temperature furnaces. Nanocrystalline ceramics can be pressed into complex net shapes and sintered at significantly lower temperatures than conventional ceramics.
f) Water Purification
Nano-engineered membranes could potentially lead to more energy-efficient water purification processes, notably in desalination by reverse osmosis. Again, these applications would represent incremental improvements in technologies that are already available. They would use fixed nanoparticles, and are therefore distinct from applications that propose to use free nanoparticles.
g) Military Battle Suits
Enhanced nanomaterials form the basis of a state-of- the-art ‘battle suit’ that is being developed by the Institute of Soldier Nanotechnologies at MIT. A short-term development is likely to be energy-absorbing materials that will withstand blast waves; longer-term are those that incorporate sensors to detect or respond to chemical and biological weapons (for example, responsive nanopores that ‘close’ upon detection of a biological agent). There is speculation that developments could include materials which monitor physiology while a soldier is still on the battlefield, and uniforms with potential medical applications, such as splints for broken bones.
Posted by Unknown at 11:09 PM