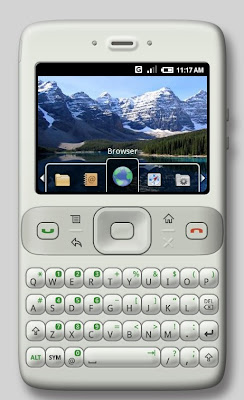 Despite multiple reports of delays and a possible merger with Symbian, a handset with Google's Android operating system is expected to debut for T-Mobile as early as October.
The first Android-powered smartphone will be manufactured by High Tech Computer, and will have a large touch screen that slides out to reveal a five-row QWERTY keyboard. The device, which has been dubbed "Dream," will be released as soon as it passes FCC certification, according to a report from the The New York Times.

Since Google first announced the mobile operating system last November, the search company has maintained a fourth quarter 2008 time frame. Google also helped form a consortium known as the Open Handset Alliance with the goal of creating an open and comprehensive platform for mobile devices.
The Android platform will also allow Google to expand its successful advertising business into the increasingly lucrative mobile market. But time to market may be an important factor for Android as it will face multiple challenges to displace existing players.
One problem may be getting Android in front of customers, as AT&T and Verizon Wireless, the two largest U.S. wireless carriers, have not agreed to have Android-powered devices on its networks. Sprint Nextel, the third-largest carrier, will have handsets with Google's OS, but has not revealed when a device would be available.
Additionally, the Android platform will be geared specifically toward the consumer market. While this gives it a broad customer base, leaving the lucrative enterprise market to the likes of Symbian, Research in Motion, and Windows Mobile could be a mistake. Even Apple made steps to ensure that its consumer-friendly iPhone would be compatible with corporate networks.
Representatives from T-Mobile and HTC did not specify when a device would be available, but they maintained that an Android-powered phone was on track for the fourth quarter.

T-Mobile will be the first carrier to offer a mobile phone powered by Google’s Android software, according to people briefed on the company’s plans. The phone will be made by HTC, one of the largest makers of mobile phones in the world, and is expected to go on sale in the United States before Christmas, perhaps as early as October.
The high-end phone is expected to match many of the capabilities of Apple’s iPhone and other so-called smartphones that run software from Palm, Research in Motion, Microsoft and Nokia to access the Internet and perform computerlike functions.
The HTC phone, which many gadget sites are calling the “dream,” will have a touch screen, like the iPhone. But the screen also slides out to expose a full five-row keyboard. A video of the phone has been posted recently on YouTube. A person who has seen the HTC device said it matched the one in the video.
The phone’s release date depends on how soon the Federal Communications Commission certifies that the Google software and the HTC phone meet network standards. Executives at all three companies are hoping to announce the phone in September because they would benefit from holiday season sales. The people briefed on the discussions declined to be named because they were not authorized to discuss the project.
Earlier this week, HTC denied a report claiming it will be forced to delay its Android handset. Late last year, Google introduced its highly anticipated Android software for mobile devices, in a move it promised could help the mobile phone industry make the Internet work as easily on phones as it already does on computers.
I still believe that seeing is believing and we will have to wait until we actually see Android in people’s hands before we can call it “real”. Is anyone out there excited about Android? Will it be a success? Will it have flaws? Thoughts?