Invisibility cloak on the new horizon 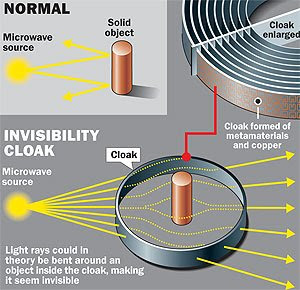 Harry Potter eat your heart out. UK and US researchers have been beavering away on creating an invisibility cloak so that we too can sneak around the gloomy halls of draughty wizards’ schools.
In fact, as long as you are just 5in tall and the person looking for you is using microwaves, you should be fine. Still, it’s a first step. The mini-cloak uses metamaterials – artificial materials – and a series copper rings. Recent tests showed how the waves could be bent around the object, concealing it’s presence. In an interview with The Times, Prof David Smith said:“Our cloak allows a concealed volume, plus the cloak, to appear to have properties similar to free space when viewed externally,” Professor David Smith, of Duke University, said. “The cloak deflects microwave beams so they flow around a ‘hidden’ object, making it appear almost as if nothing were there at all. The waves’ movement is similar to river water flowing around a smooth rock.”
Not much will happen soon but in five years time they claim they’ll be able to hide a tank. All you pervs dreaming about sneaking into the girl’s shower room can just forget it, and get back to work.- Martin Lynch

Scientists say they are a step closer to developing materials that will render people and other objects invisible.
Researchers say they can redirect light around 3D objects using metamaterials--artificially engineered structures created at a nano scale that contain optical properties not found in nature, according to an Associated Press report.
People see objects as a result of the light reflecting or scattering off them. This new mixture of materials has "negative refractive" properties that keep light from being absorbed or reflected by the object, allowing only the light from behind the object to be seen. Essentially, the material bends visible light in a way that eliminates the creation of reflections or shadows in much the way water flows around a stone.
The findings, to be released later this week in Nature and Science, were made by scientists at the University of California, Berkeley, led by Xiang Zhang. The research, which was funded in part by the U.S. Army Research Office and the National Science Foundation's Nano-Scale Science and Engineering Center, could have broad applications, including for the military.
But the materials work in limited wavelengths, so they won't be used to hide buildings from satellites, said Jason Valentine, who is a co-author of one of the papers.
"We are not actually cloaking anything," Valentine told Reuters. While the Harry Potter series of books and films has made the idea of a personal "invisibility cloak" popular, he says, "I don't think we have to worry about invisible people walking around any time soon. To be honest, we are just at the beginning of doing anything like that."