Cost effective devices expected on market soon
Imagine windows that not only provide a clear view and illuminate rooms, but also use sunlight to efficiently help power the building they are part of. MIT engineers report a new approach to harnessing the sun's energy that could allow just that. The work, to be reported in the July 11 issue of Science, involves the creation of a novel "solar concentrator." "Light is collected over a large area [like a window] and gathered, or concentrated, at the edges," explains Marc A. Baldo, leader of the work and the Esther and Harold E. Edgerton Career Development Associate Professor of Electrical Engineering. As a result, rather than covering a roof with expensive solar cells (the semiconductor devices that transform sunlight into electricity), the cells only need to be around the edges of a flat glass panel. In addition, the focused light increases the electrical power obtained from each solar cell "by a factor of over 40," Baldo says. Because the system is simple to manufacture, the team believes that it could be implemented within three years--even added onto existing solar-panel systems to increase their efficiency by 50 percent for minimal additional cost. That, in turn, would substantially reduce the cost of solar electricity 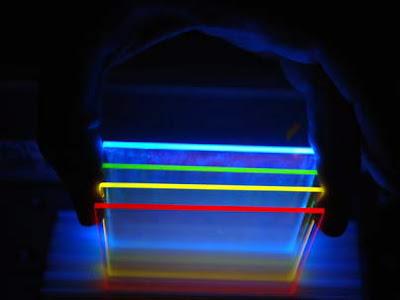 Organic solar concentrators collect and focus different colors of sunlight. Solar cells can be attached to the edges of the plates. By collecting light over their full surface and concentrating it at their edges, these devices reduce the required area of solar cells and consequently, the cost of solar power. Stacking multiple concentrators allows the optimization of solar cells at each wavelength, increasing the overall power output. 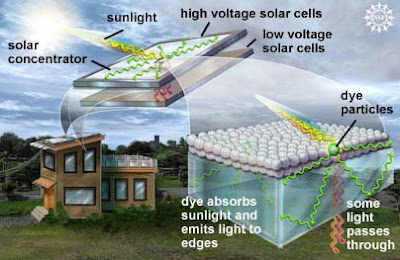 An artist's representation shows how a cost effective solar concentrator could help make existing solar panels more efficient. The dye-based organic solar concentrator functions without the use of tracking or cooling systems, greatly reducing the overall cost compared to other concentrator technologies. Dye molecules coated on glass absorb sunlight, and re-emit it at a different wavelengths. The light is trapped and transported within the glass until it is captured by solar cells at the edge. Some light passes through the concentrator and can be absorbed by lower voltage solar cells underneath. Alternatively, the partially transmissive concentrator can function as a window. Graphic not to scale