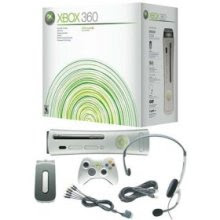 As per expectation , What would E3 week be without a price drop announcement? Hoping to stir more sales for its Xbox 360, Microsoft has finally announced the long-anticipated price drop for the standard 20GB Xbox 360 SKU while introducing a new model. The new price tag brings the 20GB down $50 to $299.99, making the once-premium 360 SKU now ever-closer to the price of the industry-leading Nintendo Wii.

Weekend flyers of all major consumer electronics resellers confirmed what had been widely reported last week: Microsoft’s hard drive-equipped Xbox 360 will get cheaper: A $50 price reduction means that the device now costs $299instead of $349, which means that the console is now $100 cheaper than Sony’s 40 GB PS3 and just $50 more expensive than Nintendo’s Wii ($249). But on a closer look, it isn’t a simple price reduction of the Xbox 360, it is a marketing move.

Microsoft press release states that the $299 price is only available “while supplies last.” In fact, the current 20 GB Premium model will be replaced with a 60 GB Premium model, which will “offer triple the storage for the same price”. In plain English: The Premium will cost $349 as soon as supplies of the 20 GB version are depleted. Sony used a similar strategy to phase out its 60 GB PS3 model: The $599 price was dropped by $100 to $499 to clear the inventory and make room for the $80 GB model, which initially sold for $599 and is priced at $499 today.

Microsoft said the prices for the entry-level Xbox 360 Arcade and the 120 GB Xbox 360 Elite remain unchanged at $279 and $449. While the 20 GB price drop as well as the announcement of a 60 GB version do not arrive unexpected, Microsoft’s decision to leave the price of the (Pro) Premium console unchanged is. Microsoft has lost a lot of momentum in recent months and the Xbox 360 was the second worst selling game console in May: 186,600 units were just slightly ahead of the Playstation portable, which sold 182,300 units. Sony sold 208,700 PS3s and Nintendo 675,100 Wiis and 452,600 portable DS consoles. Analysts noted that Microsoft is facing tough times especially in Europe and Asia.

About one year ago, we noted that Microsoft’s efforts to bridge the gap between the PS3’s 1080p high-def gaming capabilities and Nintendo’s social gaming success with a game console that is everything to everyone may push the Xbox 360 into an identity crisis. Game franchises such as Halo may not be enough to clearly define the Xbox 360 and what benefits it offers to which interests.

Plus, Microsoft’s bridging-the-gap-strategy is a so-so success. So far, there have been more social games for the Xbox 360, but no blockbuster and there is no intuitive controller available that could compete with the Wii. Compared to the PS3, the Xbox 360 still lacks a Blu-ray drive and will have to rely on an upscaling DVD player, Microsoft said. As the months pass by, this may be a big disadvantage for the Xbox 360 as HD movies become more popular and more people are thinking about purchasing a Blu-ray player: The PS3 is believed to single-handedly have decided the HD format war in Blu-ray’s favor and it is no secret that most PS3 owners watch Blu-ray movies on their console. Xbox 360 owners are stuck with DVD.