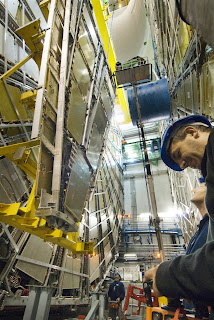 LHC ( Large Hadron Collider)
ATLAS celebrates installing the last of the eight big wheels. These wheels form the end-cap muon spectrometer of the detector.
The ATLAS end-cap muon detectors, the ‘big wheels’, have been compared to many things: flowers, orange halves, clock faces and works of art. But, more importantly, each is an incredible feat of engineering. On Friday last week the team celebrated the completion of the last wheel, and moved into the final stages of installation.

"I must admit that at the end of last year I would not have believed that we would manage to install these eight big wheels essentially on schedule," admitted Peter Jenni, ATLAS spokesperson. The first of the wheels took a long time to install, but the last one took just a couple of weeks. "This is really a great achievement."

The big wheels harbour ATLAS’s middle layer of muon chambers in the forward region and are one of the last large pieces to be installed. Each is 25m across, weighs between 40 and 50 tonnes and contains around 80 precision chambers or 200 trigger chambers. The support structure itself is just one third of the weight of the total wheel.

Because of their sheer size, each wheel had to be made in 12 pieces for the trigger planes and 16 pieces for the precision-measurement planes, or "petals", of aluminium, the last of which was installed on Friday. Each was assembled at CERN using components from all over the world before being fitted together, piece by piece like a jigsaw.

Because of the need for space for the chambers, designing a suitable structure presented a unique challenge, one that project engineers, Raphaël Vuillermet, Dimitar Mladenov and Giancarlo Spigo were happy to take on.

"The detectors themselves have been on drawings for 15 years; everyone knew where they would go but no one knew about the structure," explains Dimitar. "There were chambers everywhere so our design had to build around them and in the small spaces in between them."

The result after 3 years of calculation, design and sleepless nights was a uniquely thin and light structure that is precise to less than a millimetre.

The 100-member collaboration from Israel, Japan, the US, China, Russia, Europe and Pakistan began assembly of components in 2005 and installation in 2006. "Because the pieces are so delicate we had to be careful throughout the whole process," explains Raphaël. "I was very afraid about something happening to the chambers and also to the people, because you are working 30 metres up. But we didn’t have any problems."

The completion of the big wheels is symbolic for ATLAS because, as technical coordinator Marzio Nessi explains, "the big wheels were always seen as something we would do at the end. And now we have done them."

For Dimitar the biggest challenge was the timing. "I feel proud, but not for myself, for everyone. It was the result of hard work. The only thing that we were lucky about was the weather; if there had been a single day of heavy rain we might have been delayed. But Marzio said not to worry and to leave the weather to him, and the weather was great. I don’t know how he did it!"

Now just two smaller scale wheels and the end-wall chambers remain to be installed, and the big wheels have already begun to give read-outs as part of test runs using cosmic ray data that ATLAS performs every six weeks.

With their striking symmetry and aesthetic appeal the big wheels are likely to become icons of the experiment. But to Marzio, all pieces of ATLAS are beautiful. "This piece just happens to be 25m high."
Posted by Md Moshiur Rahman at 3:56 PM