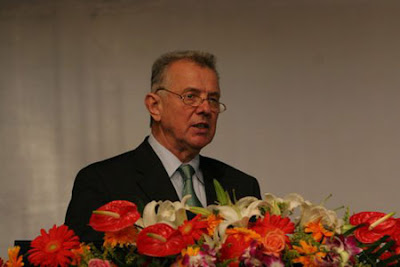 Pal Schmit, chairman of IOC's Sport and Environment Commission, reads out The Beijing Communiqué at the 7th World Conference on Sport and the Environment in Beijing, Oct. 27. (Photo: BOCOG)

The Beijing Communiqué acknowledged the UNEP report, "Beijing 2008: An Environmental Review," which pointed out that the staging of the Beijing 2008 Olympic Games, is proving to be a catalyst for accelerating environmental improvements across the city.
The Communiqué noted with appreciation that the Olympic city has cut greenhouse gas emissions by emphasizing energy efficiency, encouraging the use of renewable energy, adopting environmentally friendly commuting policies and practices, and the widespread afforestation and greening of the city.

The conference called on the sports world to take actions "to ensure sustainable and ecologically responsible sports events and activities."

Liu Jingmin, Vice Mayor of Beijing and BOCOG Executive Vice President, said that the conference not only further enriches the connotation of sports, the environment, and sustainable development, but also provides a useful guide to help the organizers implement the Green Olympic concept."
He said the organizers would continue with their effort in environmental protection to create a fine ecosystem for the success of the Games, and with the opportunity of the Games, the organizers would incorporate sports and environmental protection into the harmonious development of the society.

Also present at the conference was BOCOG Executive Vice President Jiang Xiaoyu. Over 400 representatives from more than 80 national Olympic committees (NOCs), 20 International Sports Federations (IFs), the UNEP and other UN entities, NGOs, and other organizations attended the conference.
Posted by Md Moshiur Rahman at 1:31 PM