The next frontier? MARS 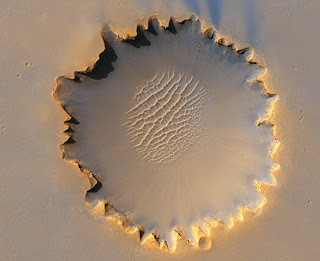 Every night while he was away, Jerry Linenger would curl up in a corner of the ceiling and read a page or two of the journals of doomed Arctic explorer Ernest Shackleton – for comfort, of all things – as the Earth drifted lazily by, far, far below.

"Their ship was crushed by the ice," Linenger says. "They had to hunt walrus to survive the winter before months of darkness set in. I'd read that and when I closed it, I would think, `It's not so bad up here.'"

Zero gravity can offer these unlikely opportunities for repose – not to mention a unique sense of perspective. For five months on the International Space Station, Linenger, an American astronaut crewing with two Russians, took solace where he could.

"I've been on submarines in the Indian Ocean, in the middle of nowhere, and it was nothing, compared to this," he says. "It was a sense of being completely dislocated from humankind, and that is a profoundly different kind of isolation."

That was five months. Can you imagine two years?

That's the best guess for a manned mission to Mars: Nine months' travel each way, with a shortcut across the orbit of Venus along the way. Depending on how long you stick around, even a brief – say, two-month – visit puts you four months shy of two years – two years off the Earth in that "complete dislocation from humankind" of which Linenger speaks.

This is not idle chatter. For all the financial stresses such a mission would entail – in 1989 NASA offered a catastrophic estimate of $400 billion, causing the hypothetical program to be scrapped; more recently, a highly optimistic $30 billion by some independent Mars advocacy groups, while in 2004, President George W. Bush said it would be $40 billion to $80 billion – this is entirely possible.

In other words, while the "if" and "when" of the mission are speculative at best – Bush's 2004 address famously recommended, not committed to, a Mars mission – we've done a remarkably good job of the "how."

Make no mistake. NASA, the Russians, and very quickly, the Chinese, likely have the technological know-how to do this right now. ("Getting people up there is quite possible. Getting them back is the hard part," says York University professor Peter Taylor, who worked on Phoenix, NASA's robotic mission to Mars currently en route. "I wouldn't want to be on the first trip.")

Starting tonight, the Discovery Channel will be airing a multi-part series called The Race to Mars that, in its exhaustive, comprehensive dramatization of an eventual Mars mission, pushes that disturbing detail aside for the sake of the argument.

And the argument – do we need to send humans to Mars? – is among the most profound we face today. Which is to say, among the ifs, whens and hows, perhaps the most compelling question, simply, is why. And there is no end to the answers that flow from anyone – astronauts, scientists, enthusiasts – you care to ask.

But the most riveting among them, perhaps, has nothing to do with science at all.

"The question I ask is, do human beings exist to strive, or to simply relax?" says Robert Zubrin, an aerospace engineer and the director of the independent Mars advocacy and research group, the Mars Society.

"Are we here to try to do great things that have never been done, to advance the frontiers of human possibility, or are we here to simply enjoy the fruits of others who have thought that way?"

In his recent book Moon Dust, the British journalist Andre Wright set out to interview the surviving astronauts of the Apollo missions to the moon, all now well into their 70s.

He was struck by the fact that, in a decade or less, there could well be no one left alive who knew what it was to stand with ground under their feet not of this Earth and stare back at the big blue ball they called home.

It led Wright to describe the Apollo missions as the last optimistic act of humankind – a mission executed not for military or commercial purposes, or any other reason than it challenged the limits of human innovation and ambition. It embodied the spirit, simply, that anything was possible.

At NASA and other governmental space agencies, at least, that spirit has been on the wane for decades. "For the past thirty years, they've been going up and down to orbit, and carrying on for the sake of carrying on," Zubrin says.

When the space shuttle Columbia evaporated on re-entry in 2003, it sent NASA into deep self-examination. A presidential commission on the disaster came back with an indictment of the program as lacking direction and purpose.

"Essentially, they said, `If you're going to assume the costs and risks of human space flight, you need to have goals that are worthy of those costs and risks,'" Zubrin says.

NASA consulted widely to determine a goal; Zubrin's group was among the consultations. In the end, they came up with that goal: Until 2010, it's shuttle and station. And then – on to the moon, and Mars.

But there's that political will issue again. Bush passed the buck to the next administration, which, when elected, will have to decide whether an investment of potentially more than $100 billion in a Mars mission is the right choice in a nation in deep economic stagger and bleeding badly in all respects from a prolonged war in Iraq.

But then, there's that which is priceless. When John F. Kennedy committed (not "recommended") to have a manned mission to the moon, it was a source of global inspiration – achievement for its own sake.

"It created that optimisitc attitude that anything is possible – that the world does not have to be as it always has been, and change is possible," Zubrin says. "It was a banner of progress and human possibility to embrace this goal."

Let us not forget the science. Zubrin's group has conducted 72 earthbound "Martian missions," in the Canadian Arctic and the Utah desert, simulating Martian living conditions and field work. The rehearsals are taken seriously, with participation from NASA and universities around the world.

Since 1964, when NASA's Mariner 4 executed the first successful flyby of the red planet, we've been to Mars a couple of dozen times, either probes on the surface or satellites in orbit, either Russian, American, Japanese or British. But we've never been there.

"Every time we go there, it's to answer a question. And inevitably, every question brings forward 10 more," said Alain Berinstain, the director of the planetary exploration program at the Canadian Space Agency. "That's why we're going to send humans to Mars: Because we can't answer all these questions robotically."

These are big ones. "Are we alone in the universe?" says Brendan Quine, the director of space engineering at York University, the country's primary research facility into Martian exploration. "These are profound questions that have far-reaching consequences."

Quine is associated with a unit called Northern Light, a joint venture between the school and Thoth Technologies, a Canadian aerospace firm. They're exploring privately funded space exploration (they hope to launch their own, private Martian probe in 2009, for a fraction of the cost of NASA's $350 million Phoenix mission).

One of Northern Light's objectives is to search for life. (Phoenix, which for the first time ever will sample some of the planet's icy ground, may beat them to it, though it's not one of the mission's stated goals.)

Key to this, of course, is water – something most believe the planet has in abundance in some form below its dusty ochre surface (the daytime temperature at the Martian equator is 20 degrees Celsius, but drops to —80 at night, so it's likely ice).

A thick band of hydrogen around the equator indicates water in some form. "We think there are very large reserves of water on Mars, actually," Quine says.

"There are clear coastlines – multiple coastlines, actually. You can't say they are until we test them, but they appear to be coastlines. In fact, we think that if we melted all the waters on Mars, we would flood the ocean basins to a depth of 500 metres. Then you've got a planet a lot like Earth."

Not that this is possible, of course. "But maybe there are ways, without substantially damaging the ecosystem, to bring Mars alive again."

Ecosystem. Again. Which assumes there is an ecosystem, and that there was one before. Strictly theory, of course, but a good one, suggests the impact of a massive meteorite, 20 kilometres wide, which hit Mars at a speed of 20 kilometres a second (its impact zone is the massive Hellas Crater, 2,100 kilometres wide). In theory, the impact would have thrown up millions of tonnes of debris, forcing the planet to heat up dramatically and the atmosphere to escape.

More theory: The thin Martian atmosphere is largely carbon dioxide. Left on its own, in a short 10,000 years, UV radiation would break it down to carbon monoxide. But it hasn't. "That means something is artificially maintaining the carbon dioxide atmosphere." Such as? "Micro-biological life produces carbon dioxide," Quine says. "I suppose volcanoes do as well, but we haven't seen much evidence of that."

Aha. Which is why we need to get there. For Quine and many others, all the robotic probes are a dress rehearsal for the real thing. "Before we send people, we need to know what the environment's like," he says.

He speaks as though it's an inevitable. He's not alone.

"We shouldn't think of it as a fairytale," Berinstain says. "The simple fact is, human beings go places they haven't been before, and as soon as they can. I don't know if it'll happen in 20, 30 or 100 years from now, but it will happen. There's no doubt in my mind about that."

For Zubrin, it's not we will, but we must. "To say we cannot accept the risks of humans to Mars would be to turn our backs not only on Apollo, but on Lewis and Clark, on Colombus, and everyone who took a chance to open up new possibilities to create the world we currently have," he says.

"For us to not accept that risk is for us to say we've become less than the people who got us to where we are today.

"And to me, that is something our society cannot afford."
Posted by Md Moshiur Rahman at 5:39 PM