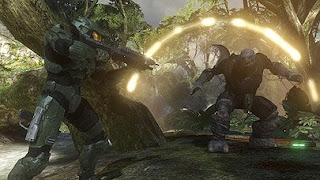 24hoursnewsunder a dusty ol' Atari 2600 console, you know what happens at 12:01 a.m. this Tuesday. At more than 10,000 shops across North America, salespeople will face a late-night onslaught of twitchy-thumbed gamers for a moment of commercial frenzy – the release of Halo 3.

The final instalment in the hugely successful Halo video game series launches Sept. 25 for the Xbox 360. More than 500 retailers in Canada will open at midnight for the launch of Halo 3, which already has one million preorders in North America – making it the fastest-selling preordered game in history.

IGN's GamerMetrics analyst Nick Williams predicts Halo 3, made by Microsoft's Bungie Studios, will sell more than 4 million copies in the U.S. alone in the next two months.

This is a franchise with such tremendous buzz, consumer tech bible Wired magazine – which has Halo's protagonist Master Chief on its cover this month – is calling it "a cultural touchstone, a Star Wars for the thumbstick generation."

"It's a game series you could really rally behind because they're easy to get into, yet difficult to master," says Jeff Gerstmann, editorial director for GameSpot.com, an online video game magazine. "Plus they have a good story, a likeable main character and multiplayer gaming over the Internet."

Sharma McCarthy, a 31-year-old project manager for a Toronto telecommunications company, says his passion for the series derives from its "super-involved story."

"No other game plays like it, in terms of look and feel. Bungie has an amazing level of detail."

For the uninitiated, Halo 3 continues Master Chief's fight against relentless alien races bent on destruction, concluding the story arc that began with 2001's Halo: Combat Evolved. Halo 3 offers new features including a four-player co-operative mode (letting gamers run through the single-player campaign with up to three friends, either on the same TV or over the Xbox Live online service); the ability to record game highlights; and new multiplayer maps.

"We know we have a pop-culture phenomenon on our hands here," says Ryan Bidan, product manager of games at Microsoft Canada.

"But despite its epic story and scope, our goal with Halo 3 is to make the game as accessible to as many people."

To ensure the continued commercial success of this billion-dollar franchise, Microsoft has spent an estimated $10 million on its marketing campaign, says BrandWeek magazine, including TV spots during Monday Night Football, summer concert sponsorships and promotional deals inked with PepsiCo, 7-Eleven, Burger King, Pontiac, NASCAR and others.

Developed at Kirkland, Wash.,-based Bungie Studios, Halo 3 was created by 120 full-time employees – double the number that developed Halo 2 – as well as an "army" of part-time contractors, says Microsoft.

To tweak the multiplayer component of Halo 3, Microsoft held a widely publicized beta test this past spring, allowing more than 820,000 gamers to join online multiplayer matches for free.

Mike Zak, a B.C.-born designer at Bungie, says the pressure from the outside world to produce a game that lives up to the hype is nothing compared to what the team puts upon itself.

"We're our own worst critics," says Zak. "We're fortunate our fans are so appreciative but, truthfully, the real pressure comes from within our walls to create the best possible interactive entertainment experience possible. We're anxious to hear if we delivered."

The video game industry is facing a lot of "sequelitis" this coming season, says Gerstmann, with Guitar Hero 3 and the fourth Grand Theft Auto, which shouldn't make fans of the originals nervous.

"(Games) are one of the few forms of entertainment where the sequels are usually better than the originals."

That's what McCarthy is hoping he'll get on Tuesday – and he's not taking any chances.

"I have bought a couple of preorders ($70 apiece) to make sure I'm not that guy who doesn't get one. "On Monday night, me and my friends are having a farewell to Halo 2 party where we'll be playing it one last time. I've been online every day downloading podcasts, watching videos, reading articles, I even made my own Halo 3 T-shirts ... My friends are even more nuts than me ... (one) stocked up a wine fridge with Red Bull and PowerBars and we're all going online in the middle of the night (after picking up the Halo 3 preorder), and promised not to go to sleep until we all finished campaign in co-op mode."
Posted by Md Moshiur Rahman at 5:33 PM