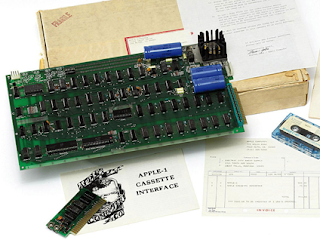 . Computer the unlimited doors to technology . Now Talk about a smart tech buy. An Apple computer purchased more than 30 years ago has sold for 425 times its original selling price.

Christie's called the computer a "historic relic" and said the auction included all the original components, including its 8K bytes of RAM, in its original shipping box, as well as a signed letter from Jobs to the original owner.

The winning bidder was Italian businessman and private collector Marco Boglion, who made his offer over the phone, according to the Associated Press.

Fellow Apple co-founder Steve Wozniak, who attended the auction in London, threw in an autographed letter with the sale. Wozniak said he was proud to have his work auctioned alongside such technologically notables as an Enigma, the World War II German code-making machine, and documents from British mathematician Alan Turing, a pioneer of modern computing.

"Today my heart went out as I got to see things auctioned off like the Turing documents and the Enigma machine--and the Apple I," Wozniak reportedly told journalists after the auction. "It really was an important step, (even though) I didn't feel that way when I designed it."
Posted by Unknown at 8:13 PM

To be honest, I especially like the stunning look of these diamond Louis Vuitton handbags . They are also wonderful accessories to flaunt your luxurious lifestyle. Apparently, it is absolutely not smart to force yourself to buy something you cannot afford. If you have the ability to afford their hefty prices, your best options would be luxurious models from top designer houses like Rolex, Omega, and Cartier.