Star navigation aid for lunar surface sold at auction for $218,000 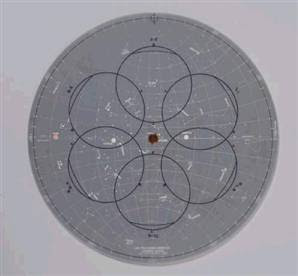 A navigational chart used by Apollo 11 astronauts has become the unexpected star of an auction in New York City marking the 40th anniversary of man's first lunar landing.
Bonhams New York said that the lunar surface star chart sold Thursday for an astronomical $218,000. The tool, with a 9-inch (23-centimeter) diameter, had been expected to bring in $70,000 to $90,000.
The device consists of two plastic discs riveted together. The lower disc shows Earth, the sun, planets and star patterns against a black background. The upper disc is a semi-transparent overlay that could be turned to calculate position.
The historic mission of astronauts Neil Armstrong and Buzz Aldrin began exactly 40 years earlier, on July 16, 1969, and came to a climax on July 20 with the moon landing. In a letter accompanying the sale item, Aldrin wrote that "this star chart was the single most critical navigational device we used while on the moon."
Among the expected highlights of the auction were three checklists from the landing's descent. Signed by Aldrin, the lot had been estimated to fetch $125,000 to $175,000. But the checklists failed to sell.
The sale contained about 350 items from a variety of space missions.
Posted by Unknown at 10:05 AM