Debris Did Not Damage Shuttle -NASA 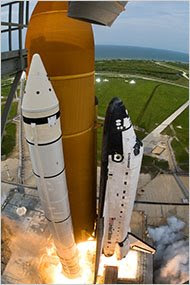 The space shuttle Endeavour lifted off Wednesday from the Kennedy Space Center in Florida, and during the liftoff, several pieces of foam fell from its external fuel tank.
“We don’t expect any issues,” John Shannon, the shuttle program manager, said at a news conference. “We’re not worried about this flight.”
Since the loss of the shuttle Columbia in 2003, because of damage caused by a piece of insulating foam that struck the left wing, the National Aeronautics and Space Administration has taken painstaking care to analyze instances of foam falling off during liftoffs.
A camera on the Endeavour’s external tank captured at least a dozen instances of falling debris. One large piece, about six inches square, came off 6 minutes 17 seconds into flight, but by that time the shuttle had largely risen out of the atmosphere, and the foam, even if it hit the orbiter, would not have hit with much velocity.
But two showers of debris flew off much earlier, one at 1 minute 47 seconds after launching and another eight seconds later. A couple of pieces could be seen hitting the orbiter near the nose, leaving small white spots. Mr. Shannon said the damage there appeared slight.
Those pieces originated near the camera, perhaps making them look bigger. “It was dramatic footage looking at it,” Mr. Shannon said.
What is not yet clear is whether any pieces hit farther to the back.
The Endeavour astronauts spent their first full day in orbit using a camera and laser scanner attached to the end of the shuttle’s robotic arm to scan the shuttle’s nose cone and the leading edges of the wings. On Friday, as the shuttle approaches the International Space Station for docking, it will perform a backflip to allow the astronauts on the station to photograph its underside.
As shown in photographs taken of the external tank after it was jettisoned, most of the missing foam peeled off in strips from the intertank section.
“That was a little bit of a surprise to us,” Mr. Shannon said.
The fuel tank actually consists of two tanks, one at the top for liquid oxygen and one at the bottom for liquid hydrogen. The intertank is the cylindrical structure connecting the two tanks.
Because the intertank is not in contact with either the ultracold liquid oxygen or liquid hydrogen, the foam there is thinner — about half an inch. That also means that it does not experience the same temperature fluctuations; this type of shedding had not been seen before.
The foam somehow did not adhere properly to the metal structure, and in at least seven or eight places, it came completely off.
Mr. Shannon said that while it did not appear that the Endeavour suffered significant damage, the problem would need to be understood and, if necessary, fixed before the next shuttle flight, of the shuttle Discovery, currently scheduled for Aug. 18.
Meanwhile, NASA has a new leader. On Wednesday, the Senate confirmed Maj. Gen. Charles F. Bolden Jr., a former astronaut, as the new administrator, and Lori B. Garver, a former associate administrator at the agency, as deputy administrator.
Posted by Unknown at 10:10 AM

fake handbags haversack can yield on hundreds of looks just depending on its owner. It can arise like Charlie’s Angle’s essentials if toted by Pixie Geldof who knows to brace it with her all-in-pitchblack accoutrements and alcove an aftereffect as amazing as Lauren Pemington Platt ’s scarlet feast dress and atramentous Chanel croc covering accessory bag.