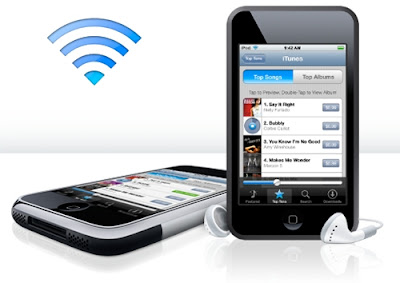 The cost of talking on the go is coming down, thanks to an increasing number of options for using Internet calling services on cellphones as an alternative to traditional cellular service plans.

Nokia is one of the biggest makers of cellphones that include chips for using Wi-Fi, the short-range wireless technology. Some high-profile devices are equipped with the technology, including Apple's iPhone and some BlackBerry models from Research In Motion. The soon-to-be-released G1 Google phone from HTC and T-Mobile also sports a Wi-Fi chip.

For Mark Laris, a Dallas-based nuclear engineer who travels the world running his consulting business, the technology saves him thousands of dollars a year on international phone bills.

Wi-Fi chips and Voice over Internet Protocol, or VoIP, let him do most of his business and personal calls over cut-rate phone services that work over the Web. His only cellphone bill is a 1,400-minute-per-month family plan from AT&T that he shares with a business partner.

"I always make VoIP calls," he said, adding that the call quality was as good as with a traditional mobile phone service.
He has access to the VoIP services by using a Nokia phone that has a Wi-Fi chip similar to the ones that allow laptops to connect to the Web in smaller venues like coffee shops.

The new phones are capable of operating exclusively with Wi-Fi - they do not need to use a cellphone network at all - and when the user is not in a Wi-Fi "hot spot," calls are routed to the Wi-Fi carrier's voice mail service.

In the United States, T-Mobile sells Wi-Fi phones and Internet calling plans that cost $10 a month, on top of regular fees. It is the only U.S. carrier with such a package. The market is also filled with small, privately held companies hoping to make a name for themselves. They include DeFi Mobile, Fring, Gizmo5, Sipgate and Truphone.

One advantage that these new companies have in competing with established VoIP services like Skype and Vonage is that old-style Internet calling required users to be sitting in front of a computer or hooked up to a laptop to make calls. Mobile phones with Wi-Fi chips free them from their PCs.

Ivan Domaniewicz, a commercial airline pilot with homes in Miami and Barcelona, recently switched to DeFi Mobile from Skype. His $40-a-month DeFi plan gives him unlimited Internet calls, voice mail and phone numbers in Argentina and Spain that are automatically transferred to his Nokia phone.

"It's really helped me keep in touch with my family and friends in Argentina and Spain," said Domaniewicz, who shuttles between the United States, Japan, Europe and the South Pacific.

"What's nice is that I don't have to take my computer out and start Skype-ing to talk to them. I just turn on my phone," he said.

Brilliant has tried other mobile VoIP services and said that the technology could sometimes prove more reliable than cellphone service. When a family friend recently went into labor, he found himself making phone calls via a Wi-Fi network at the hospital.

"You can get it in places where there is no cellphone reception," he said.

Viva la WiFi calls revolution!"
Now that WiFi enabled phones are starting to get into the market, it can be easily foreseen that WiFi calls will become a reality for mainstream users in the next 3-30 years. Why this wide range? Well, 3 years if it was dependant purely on technology advancement, 30 years if it's up to the operators...

Yes, though they try to be cool about it, operators are very much afraid of WiFi calls, and it's very easy to understand why: When you have a WiFi enabled phone, whenever you are around a WiFi hotspot you have internet access which means that you can technically make voice calls over the internet the same way you make them with Skype on your PC.

If your phone is Windows mobile based, you can actually run Skype Mobile, simple as that. If it's not, third parties such as Fring and Truphone offer their own solutions. Without getting into details about the solutions and their differences, they enable VoIP calls over WiFi and also over 3G. (BTW - VoIP over 3G is cost effective only if you have a flat/cheap data plan, if you're not roaming and of course provided that your operator doesn't block it...). In addition phones are starting to come with built-in VoIP software.
Now WiFi is not everywhere, and also not always free, but even if you are in the airport, suddenly the outrageous $10/hour rate can make sense when it comes as an alternative to mobile calls while roaming.

Over the past years, operators have been fighting to provide their subscribers a walled garden Internet instead of an open environment in order to route all mobile content through their channels and cut their usual 50% cut. This has been going on despite of legislation and despite of protests of strong content providers such as Google.How much of their revenues do operators make from data services you ask? Well, it's 7%-20% (Including SMS, browsing and mobile content). Voice accounts for more than 80%, and even 90% of operators revenues. Think how far they would be willing to go in order to protect that.And this exactly why Vodafone and Orange asked Nokia to disable VoIP on the N95 in such a way that not even possible to use Truphone, and you can see Truphone's video demo comparing an unlocked phone vs. a locked one. (BTW - I perceive the N95 as a breakthrough, since most of the other WiFi enabled phones are far away from mainstream, either the Blackberry-like E61, the Windows bulky smartphones etc.)

Another example is that the all powerful iPhone was released with no WiFi calls support. Apple has done a lot to equip this gadget with all the software needed to enjoy the full experience of a phone/media/Internet, so why not include the one killer app that could have utilized 2 of the iPhone strengths?

But unlike the battle for mobile content which is still waging (With the operators having the upper hand), this is one battle they can't win, and in fact this battle will also make them lose the battle over mobile content. And the reason for that is simple: Up until now, the operators were our ISP as well. Every data packet came through their gateways, and as such they could always block whatever they wanted: By IP address, by file type (ringtones, games), by protocol (SIP) etc.

WiFi phones provide the bypass everyone has been waiting for: You can access the Internet directly whenever you are around a WiFi spot, and the operator can't do anything about it. What it can do, is sell its subscribers blocked phones, but soon everyone will understand that it's better to buy unlocked phones from retail stores.

Knowing that, some operators are embracing the "if you can't beat them, join them" approach. One of those is T-Mobile which is even promoting now a WiFi phone, but still capitalizes on this "generous" offer by taking $10/month from subscribers. Another operator that promises to open up is Hutchison/3.In any case, operators are going to have to be creative and innovative to turn this situation from a potential disaster to a stage in their evolution. I am sure that in this case openness will be rewarded with customer loyalty, while tricks like locking phones, which is in any case a very temporary "solution", can only have the effect of antagonizing customers.We should also remember that in any case, that while WiFi is spreading to a lot of places even to the extent of city-wide hotspots, it is still far from the worldwide coverage that operators networks supply (for now...), and this is another reason for operators to act wisely and not block WiFi, so their users stay loyal and use their network when out of WiFi range.P.S. - For more on the N95 blocking you can read this. Also as a side note, even PSP will support VoIP soon.