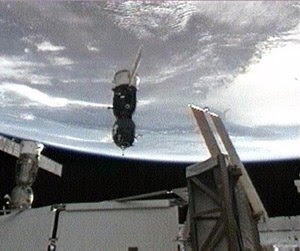 The TMA-13 capsule automatically latched onto the station a few minutes ahead of schedule, two days after blasting off from the Baikonur cosmodrome in Kazakhstan.

Aboard the capsule was space traveler Richard Garriott, who paid a reported US$30 million for a 10-day stay on the station.

Garriott's father, Owen, applauded as he watched the docking from Russian Mission Control outside Moscow.

"I'm pleased everything is going smoothly. It's looking great and they are starting off on a fascinating new adventure," he told The Associated Press.

"There was not a lot of nervousness today or during the launch. We were confident it would go well," he said.

Also aboard were U.S. astronaut Michael Fincke and Russian cosmonaut Yuri Lonchakov. They will replace the station's current crew and spend several months in orbit.

The trio will enter the station when the hatches are opened in several hours.

Garriott will return to Earth on Oct. 23 with Russian cosmonaut Yuri Volkov, who has been at the station since April.

Volkov was the first man to follow his father, a decorated cosmonaut from the Soviet era, into space.


Computer games designer Garriot, 47, paid Space Adventures around $17m for the privilege of joining American Mike Fincke and Russian Yuri Lonchakov on Expedition 18 to the outpost. His father, Owen Garriott, spent 60 days aboard Skylab back in 1973, and he'll apparently spend some of his stay snapping the Earth's surface to see how it's changed since dad's time in orbit.

Garriott will return to Earth in a Soyuz TMA-12 on 23 October with Expedition 17 crew members Commander Sergei Volkov and Flight Engineer Oleg Kononenko, who've been aloft since 8 April. The third ISS crew member to welcome Expedition 18 is Gregory E. Chamitoff, who arrived aboard Discovery's STS-124 mission which launched on 31 May.

Fincke and Lonchakov are both ISS vets, with the former on his second gig, and the latter on his third tour. They'll be on board for six months, during which the crew will prep the station's life-support equipment for a permanent compliment of six crew members from next year.

Chamitoff will be relieved in November by astronaut Sandra H. Magnus, scheduled to fly to the station on Endeavour's STS-126. The mission is due to deliver extra equipment for the ISS's crew expansion.

After that, NASA has eight further shuttle flights to the ISS on its launch roster, before the fleet's final 2010 retirement. In 2009, Discovery (STS-119 delivering final solar arrays to the ISS) is slated to lift off on 12 February. Endeavour will on 15 May carry the final components of Japan's kibo lab (Exposed Facility and Experiment Logistics Module Exposed Section) on mission STS-127, while Atlantis (STS-128) is slated to launch on 30 July bearing science and storage racks for the station.

Discovery will be back in in the air on 15 October, when its mission STS-129 will "focus on staging spare components outside the station". The 2009 schedule wraps on 10 December with Endeavour on STS-130 whisking spacewards the "Cupola" - a "robotic control station with six windows around its sides and another in the center that provides a 360-degree view around the station".

The other planned shuttle launch is that of Atlantis' STS-125 mission to service Hubble, now knocked back to 2009 and "under review". ®
Posted by Unknown at 6:36 PM