Coundown :The multibillion-dollar Large Hadron Collider will explore the tiniest particles and come ever closer to re-enacting the big bang 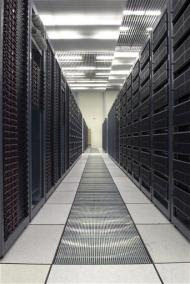 This undated photo provided by CERN on Friday, Sept. 5, 2008 shows a view into the Grid PC farm at the CERN Computer Centre, where banks of computers process and store data produced on the CERN systems. When the LHC starts operation in September 2008, it will produce enough data every year to fill a stack of CDs 20 km tall. To handle this huge amount of data, CERN has also developed the Grid, allowing processing power to be shared between computer centres around the world. (AP Photo/CERN) ** MANDATORY CREDIT: CERN *
GENEVA (AP) — It has been called an Alice in Wonderland investigation into the makeup of the universe — or dangerous tampering with nature that could spell doomsday.
Whatever the case, the most powerful atom-smasher ever built comes online Wednesday, eagerly anticipated by scientists worldwide who have awaited this moment for two decades.
The multibillion-dollar Large Hadron Collider will explore the tiniest particles and come ever closer to re-enacting the big bang, the theory that a colossal explosion created the universe.
The machine at CERN, the European Organization for Nuclear Research, promises scientists a closer look at the makeup of matter, filling in gaps in knowledge or possibly reshaping theories.
The first beams of protons will be fired around the 17-mile tunnel to test the controlling strength of the world's largest superconducting magnets. It will still be about a month before beams traveling in opposite directions are brought together in collisions that some skeptics fear could create micro "black holes" and endanger the planet.
The project has attracted researchers of 80 nationalities, some 1,200 of them from the United States, which contributed $531 million of the project's price tag of nearly $4 billion.
"This only happens once a generation," said Katie Yurkewicz, spokeswoman for the U.S. contingent at the CERN project. "People are certainly very excited."
The collider at Fermilab outside Chicago could beat CERN to some discoveries, but the Geneva equipment, generating seven times more energy than Fermilab, will give it big advantages.
The CERN collider is designed to push the proton beam close to the speed of light, whizzing 11,000 times a second around the tunnel 150 to 500 feet under the bucolic countryside on the French-Swiss border.
Once the beam is successfully fired counterclockwise, a clockwise test will follow. Then the scientists will aim the beams at each other so that protons collide, shattering into fragments and releasing energy under the gaze of detectors filling cathedral-sized caverns at points along the tunnel.
CERN dismisses the risk of micro black holes, subatomic versions of collapsed stars whose gravity is so strong they can suck in planets and other stars.
But the skeptics have filed suit in U.S. District Court in Hawaii and in the European Court of Human Rights to stop the project. They unsuccessfully mounted a similar action in 1999 to block the Relativistic Heavy Ion Collider at the Brookhaven National Laboratory in New York state.
CERN's collider has been under construction since 2003, financed mostly by its 20 European member states. The United States and Japan are major contributors with observer status in CERN.
Scientists started colliding subatomic particles decades ago. As the machines grew more powerful, the experiments revealed that protons and neutrons — previously thought to be the smallest components of an atom — were made of still smaller quarks and gluons.
CERN hopes to recreate conditions in the laboratory a split-second after the big bang, teaching them more about "dark matter," antimatter and possibly hidden dimensions of space and time.
Meanwhile, scientists have found innovative ways to explain the concept in layman's terms.
The team working on one of the four major installations in the tunnel — the ALICE, or "A Large Ion Collider Experiment" — produced a comic book featuring Carlo the physicist and a girl called Alice to explain the machine's investigation of matter a split second after the Big Bang.
"We create mini Big Bangs by bumping two nuclei into each other," Carlo explains to Alice, who has just followed a rabbit down one of the hole-like shafts at CERN.
"This releases an enormous amount of energy that liberates thousands of quarks and gluons normally imprisoned inside the nucleus. Quarks and gluons then form a kind of thick soup that we call the quark-gluon plasma."
The soup cools quickly and the quarks and gluons stick together to form protons and neutrons, the building blocks of matter.
That will enable scientists to look for still missing pieces to the puzzle — or lead to the formulation of a new theory on the makeup of matter.
Kate McAlpine, 23, a Michigan State University graduate at CERN, has produced the Large Hadron Rap, a video clip that has attracted more than a million views on YouTube.
"The things that it discovers will rock you in the head," McAlpine raps as she dances in the tunnel and caverns.
CERN spokesman James Gillies said the lyrics are "absolutely scientifically spot on."
"It's quite brilliant," Gillies said.
India with CERN.
Even as India secures its historic entry into the global nuclear supply arrangement, it has another major event to celebrate in the coming days — its participation in the mankind’s biggest scientific experiment which starts on Wednesday at the Geneva-France countryside.

If all goes well, the experiment will unravel the mysteries of the universe, particularly the very moment that led to the creation of time and space, a la the Big Bang.
Despite not being a member of CERN, the European nuclear research organisation, India made a significant contribution as an observer state to the build-up of the $9 billion experiment. Scores of Indian scientists and other professionals in nuclear and other material sciences took part in select areas of setting up the Large Hadron Collider (LHC) machine over the last 20 years.
The LHC is at the heart of the experiment that will contribute to the knowing of the unknown in the formation of the universe. “The privilege to participate in the 21st century’s biggest scientific experiment and the modest role played in setting up the LHC and experiments are indeed major achievements for India,” said Archana Sharma, staff scientist at CERN.
Indian research establishments including the Tata Institute for Fundamental Research (TIFR), Bhaba Atomic Research Centre, Saha Institute, and Punjab University were involved in providing software and quality-testing services of detectors.
“To study and view the experiments from 70 million channels, you need awesome computing infrastructure and TIFR is involved in addressing some of the software requirements,” Sharma said, suggesting that India contributed about $25 million towards the LHC project.
The LHC project also generated some legal challenges and led to fears about the possible creation of a black hole that would wreck the planet. But the attempts to stop the machine from experimenting were dismissed in courts.
Posted by Unknown at 1:57 AM

I'm Alisha from Wowzio, and I'm excited to tell you about our new widget platform that helps bloggers increase readership by providing engaging widgets containing your blog's rich content. You can check out widgets customized for your blog here:

Wowzio Widgets for your Blog

I wanted to reach out to you to ask for your feedback on these widgets (feel free to install them on your blog, if you feel they are a good fit). I'm sorry for leaving this message via a comment, it's not at all our intent to spam you ( which is why i'm leaving this comment on an older post and you can always remove this comment ). Again, we would love to hear your feedback.