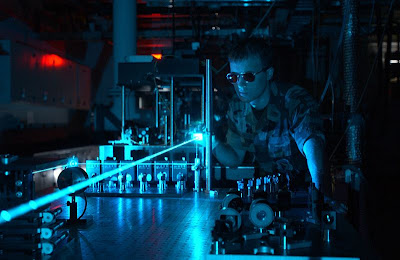 A laser is a device that emits light (electromagnetic radiation) through a process called stimulated emission. The term "laser" is an acronym for Light Amplification by Stimulated Emission of Radiation. Laser light is usually spatially coherent, which means that the light is either emitted in a narrow, low-divergence beam, or can be converted into one with the help of optical components such as lenses. Typically, lasers are thought of as emitting light with a narrow wavelength spectrum ("monochromatic" light). This is not true of all lasers, however: some emit light with a broad spectrum, while others emit light at multiple distinct wavelengths simultaneously. The coherence of typical laser emission is distinctive. Most other light sources emit incoherent light, which has a phase that varies randomly with time and position.
The first working laser was demonstrated on May 16, 1960 by Theodore Maiman at Hughes Research Laboratories. Since then, lasers have become a multi-billion dollar industry. By far the largest single application of lasers is in optical storage devices such as compact disc and DVD players,[citation needed] in which a semiconductor laser less than a millimeter wide scans the surface of the disc. The second-largest application is fiber-optic communication. Other common applications of lasers are bar code readers, laser printers and laser pointers.
In manufacturing, lasers are used for cutting, bending, and welding metal and other materials, and for "marking"—producing visible patterns such as letters by changing the properties of a material or by inscribing its surface. In science, lasers are used for many applications. One of the more common is laser spectroscopy, which typically takes advantage of the laser's well-defined wavelength or the possibility of generating very short pulses of light. Lasers are used by the military for range-finding, target designation, and illumination. Lasers have also begun to be used as directed-energy weapons. Lasers are used in medicine for surgery, diagnostics, and therapeutic applications. More.
Applications.
There are many scientific, military, medical and commercial laser applications which have been developed since the invention of the laser in the 1958. The coherency, high monochromaticity, and ability to reach extremely high powers are all properties which allow for these specialized applications.
More
Posted by Unknown at 10:48 AM