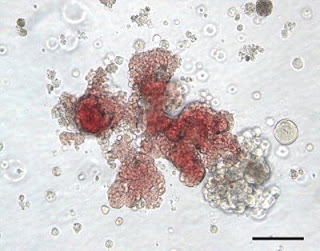 Advanced Cell Technology, Inc. ("ACT") (OTC: ACTC.PK) reported that it is feasible to differentiate and mature human embryonic stem cells (hESCs) into functional oxygen-carrying red blood cells (RBCs) under conditions suitable for scale-up. The research, which appears online (pre-published ahead of print) in the journal Blood -the leading publication in the field --by ACTC and its collaborators at the Mayo Clinic and the University of Illinois, shows for the first time that the oxygen-carrying capacity of hESC-derived blood cells is comparable to normal transfusable RBCs, and that the cells respond to biochemical changes in a physiologically effective manner.
"Limitations in the supply of blood can have potentially life-threatening consequences for patients with massive blood loss," said Robert Lanza, M.D., Chief Scientific Officer at ACT, and senior author of the study. "Embryonic stem cells represent a new source of cells that can be propagated and expanded indefinitely, providing a potentially inexhaustible source of red blood cells for human therapy. We can currently generate 10 to 100 billion red blood cells from a single six-well plate of stem cells. The identification of a stem cell line with "O -" blood-type would permit the production of compatible "universal donor" blood. We also have work underway to generate reprogrammed (iPS) stem cells from individuals with universal-donor blood."
The efficient and controlled differentiation of hESCs into homogeneous RBC populations has not been previously achieved. This paper describes for the first time the generation of RBCs from hESCs with oxygen-transporting capacity, and that the functional properties of these cells are similar to those of normal erythrocytes. Multiple stem cell lines were stimulated to undergo differentiation in vitro to form functional RBCs (blood types A, B, O, and both RhD+ and RhD-) on a large scale under conditions suitable for scale-up and clinical translation. Although alternative sources of progenitors for the generation of large-scale transfusable RBCs have been investigated, including cord blood, bone marrow and peripheral blood, it is clear that even after expansion and differentiation, these sources represent donor-limited sources of RBCs. Moreover, the low prevalence of O(-) type blood in the general population further intensifies the consequences of blood shortages for emergency situations and battlefield trauma care, where the need for blood typing can imposes serious delays in initiating transfusions
Another critical issue for clinical utilization of hESC-derived RBCs is whether they can be enucleated in vitro. "We show that up to 65% of the blood cells underwent multiple maturation events that resulted in the extrusion of the nucleus," stated Shi-Jiang Lu, Ph.D., Director of Differentiation at ACT and first author of the paper. "They formed enucleated erythrocytes with a diameter of 6-8 (mu)m, which is similar to normal red blood cells. We also showed that the cells could express adult (beta)-globin and respond normally to biochemical changes."
"We believe this breakthrough could potentially benefit many Americans," stated William M. Caldwell, CEO and Chairman of ACTC. "Although more work is required before this can move into the clinic, we are pleased with the rapid progress that is being made by our scientists and others. We are optimistic about the potential future role for stem cells as a donorless source of blood for transfusion"
The researchers of the paper from Advanced Cell Technology collaborated with scientists from the University of Illinois at Chicago, and the Mayo Clinic, Rochester, Minnesota. The paper's other authors are Qiang Feng and Jennifer Park of ACT, Loyda Vida, Bao-Shiang Lee, and George Honig at the University of Florida, and Michael Strausbauch and Peter Wettstein at the Mayo Clinic.
Link to article (Open Access): http://bloodjournal.hematologylibrary.org/papbyrecent.dtl
About Advanced Cell Technology, Inc.
Advanced Cell Technology, Inc. is a biotechnology company applying cellular technology in the emerging field of regenerative medicine. For more information, visit http://www.advancedcell.com.
Forward-Looking Statements
Statements in this news release regarding future financial and operating results, future growth in research and development programs, potential applications of our technology, opportunities for the company and any other statements about the future expectations, beliefs, goals, plans, or prospects expressed by management constitute forward-looking statements within the meaning of the Private Securities Litigation Reform Act of 1995. Any statements that are not statements of historical fact (including statements containing the words "will," "believes," "plans," "anticipates," "expects," "estimates," and similar expressions) should also be considered to be forward-looking statements. There are a number of important factors that could cause actual results or events to differ materially from those indicated by such forward-looking statements, including: limited operating history, need for future capital, risks inherent in the development and commercialization of potential products, protection of our intellectual property, and economic conditions generally. Additional information on potential factors that could affect our results and other risks and uncertainties are detailed from time to time in the company's periodic reports, including the report on Form 10-QSB for the quarter ended September 30, 2007. Forward-looking statements are based on the beliefs, opinions, and expectations of the company's management at the time they are made, and the company does not assume any obligation to update its forward-looking statements if those beliefs, opinions, expectations, or other circumstances should change.
Forward-looking statements are based on the beliefs, opinions, and expectations of the company's management at the time they are made, and the company does not assume any obligation to update its forward-looking statements if those beliefs, opinions, expectations, or other circumstances should change. .

“This is a scalable process, and there’s virtually no limit to the amount of blood you could produce, given the time and resources,” Robert Lanza, vice president of medical and scientific development for Advanced Cell, said.

The created blood cells were able to carry oxygen the same way as the normal ones. Moreover, they appear to be able to deliver it to the tissue correctly. The researchers further unveiled that 65 percent of these cells are able to reach full maturity and shed their nucleus.

The next goal of the company is to see how the cells function in living beings. They hope that one day that can use this blood in human transfusions.

This new method of creating cells could put an end to the nation’s chronic problems with blood shortages and ease worries about contamination. There is one impediment however, as the cost of producing one unit of blood using this method raises to a few thousands dollars.

Roger Dodd of the American Red Cross said that manufacturing blood is “an ambitious goal” that would likely cost far more per pint than donated blood.
Posted by SANJIDA AFROJ at 12:02 AM