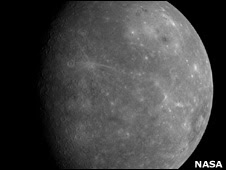 The smallest planet in the Solar System has become even smaller, studies by the Messenger spacecraft have shown.

Data from a flyby of Mercury in January 2008 show the planet has contracted by more than one mile (1.5km) in diameter over its history.

Scientists believe the shrinkage is due to the planet's core slowly cooling.

"Cooling of the planet's core not only fuelled the magnetic dynamo, it also led to contraction of the entire planet," said Principal Investigator Sean Solomon of the Carnegie Institution of Washington, US.

"And the data from the flyby indicate that the total contraction is at least one-third greater than we previously thought."

It was the first time the planet had been viewed up close since Mariner 10's third and final fly-by in March 1975.
A kidney-shaped volcanic vent surrounded by ejected material

The flyby was one of three to be made by the craft as it prepares to enter into orbit around the Solar System's smallest planet in 2011.

Just days after the pass, scientists revealed that they had found evidence of volcanic activity on the planet, previously hinted at by Mariner 10.

Further analysis of areas such as the Caloris basin, one of the Solar System's largest and youngest impact basins, found volcanic vents and evidence of "pyroclastic" debris blown from the volcano as it erupted.

Other areas contained circular structures with wrinkled edges, similar to structures seen on the Moon and Mars.

Scientists believe these are impact craters that have been filled with massive quantities of lava, possibly 2.7km (1.3miles) deep.

"That's a lot of lava," said Dr James Head of Brown University. "It shows the planet was really active in its early history."

Researchers believe the peak of activity could have been three to four billion years ago.

Sensors, such as the Fast Imaging Plasma Spectrometer (FIPS), onboard the craft also revealed details of the planet's atmospheric composition.

The scientists believe these were blasted from the surface of the planet by the solar wind, a stream of charged particles which buffets the Solar System.

Mercury's proximity to the Sun means it feels the full force of this wind, blasting atoms into space. Many of these are then trapped by the planet's magnetic field.

"The Mercury magnetosphere is full of many ionic species, both atomic and molecular," said Dr Thomas Zurbuchen of the University of Michigan.

As well as influencing the space around the planet, the core has had an immense influence on surface features.

"The dominant tectonic landforms on Mercury, including areas imaged for the first time by Messenger, are features called lobate scarps, huge cliffs that mark the tops of crustal faults that formed during the contraction of the surrounding area," explained Dr Solomon.

"They tell us how important the cooling core has been to the evolution of the surface."
Posted by Hybrid resources pvt. ltd at 12:19 PM