Distribution of fluorescent-labeled microparticles (6 µm) in EBs, as evaluated by confocal microscopy. Cell nuclei and microparticles are stained in blue and red, respectively. 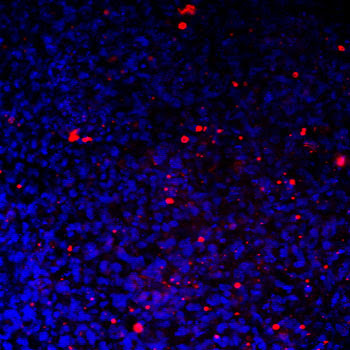 Distribution of fluorescent-labeled microparticles (6 µm) in EBs, as evaluated by confocal microscopy. Cell nuclei and microparticles are stained in blue and red,
respectively.
Regenerative medicine is an area in which stem cells hold great promise for overcoming the challenge of limited cell sources for tissue repair. Stem cell research is being pursued in laboratories all over the world in the hope of achieving major medical breakthroughs. Scientists are striving to create therapies that rebuild or replace damaged cells with tissues grown from stem cells and offer hope to people suffering from cancer, diabetes, cardiovascular disease, spinal-cord injuries, and many other disorders (if you are interested in reading more about this, the National Academies have a great website on stem cell research).
Embryonic stem cells are pluripotent. That means that during normal embryogenesis – the process by which the embryo is formed and develops – human embryonic stem cells (hESCs) can differentiate into all derivatives of the three primary germ layers: ectoderm, endoderm, and mesoderm. These include each of the more than 220 cell types in the adult body.
Since hESCs can be propagated without apparent limit in culture and are competent to differentiate into vascular cells, they offer a great opportunity in the field of tissue engineering. Today, the vascularization – the organic process whereby body tissue develops blood vessels – of tissue constructs remains a major challenge in regenerative medicine as the diffusional supply of oxygen can support only 100-200 µm thick layers of viable tissue.
To stimulate the vascular differentiation of hESCs the formation of 3D cell spheroids called embryoid bodies (EBs) has been generally adopted. EBs are aggregates of cells that mimic the structure of, and recapitulate many of the stages involved during the differentiation process of, the developing embryo. EBs can be rapidly expanded to yield differentiated cells by the use of bioreactors.
"The isolation of vascular cells from EBs has been reported, however in low numbers with generally below 10% of the overall number of cells in the cell aggregates" Dr. Lino Ferreira explains to Nanowerk. "We have now developed a new methodology to enhance the vascular differentiation of hESCs by incorporating growth factor-releasing micro- and nanoparticles in EBs. The particles release the growth factors extra- (microparticles) or intracellularly (nanoparticles), based on their size."
The results of this work, reported in the May 16, 2008 online edition of Advanced Materials ("Human Embryoid Bodies Containing Nano- and Microparticulate Delivery Vehicles"), show that in some cases the effect on vascular differentiation of particles containing growth factors was superior to that observed by exposing EBs to large extrinsic doses of the same growth factors.
Ferreira, who is affiliated with Center of Neurosciences and Cell Biology (Coimbra, Portugal) and Biocant, a life sciences research facility in Biocant Park, the first Portuguese technology park dedicated to Biotechnology, is first author of the paper. He is still collaborating with Professor Robert Langer at MIT in the area of regenerative medicine.
"Vascular cells are very promising for tissue engineering applications and the treatment of cardiovascular diseases such as myocardial ischemia" says Langer. "What we developed is a simple methodology to control the differentiation of hESCs into the vascular lineage, uses biodegradable and biocompatible components. Our approach allows for the control of several variables of potential importance for cell differentiation including growth factor concentration, spatial positioning of growth factor and combinatorial release of bioactive molecules."
The MIT team hypothesized that the local delivery of growth factors within 3D cellular structures would increase the growth factor concentration within EBs and would extend the duration of exposure of cells to the growth factors, which otherwise tend to have short half-lives.
" Another advantage of incorporating particles with EBs is that it ensures that the cells and the drug delivery system will be implanted together and subsequently stay together after placement in vivo" says Ferreira.