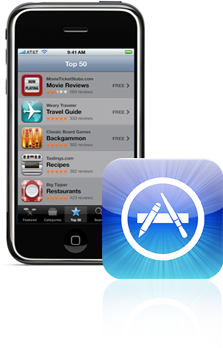 A Shopping Trip
To the App Store
For Your iPhone
The single best feature in Apple's second-generation iPhone 3G isn't the increased speed or the GPS location-finding feature. It is something called the "App Store," a clever distribution mechanism for third-party programs that can run on the iPhone and on its close cousin, the iPod Touch. And you don't even need a new iPhone to get the App Store. It is also part of a free software upgrade for older iPhones and a $10upgrade for the Touch.

In just the first 10 days since the new iPhone and the App Store launched on July 11, more than 900 programs -- applications, or "apps," in tech jargon -- have been introduced by numerous developers. Over 90% cost less than $10 or are free.

Even more noteworthy: iPhone and Touch users have downloaded 25 million copies of these programs, ranging from silly sound effects to challenging games; from news readers to restaurant locators; from social-networking programs to business applications.

Apple's App Store has seen an unprecedented amount of success and exposure since its launch, with millions of total downloads and 909 applications already available. Unfortunately, Apple has been unable to keep up with the influx of submissions from developers (each app must be approved before it appears on the store), leaving many companies frustrated and confused as their apps sit in limbo.

Adding to the frustration has been the difficulty associated with testing an application. As Craig Hockenberry, one of the people behind the popular app Twitterific explains:

The big problem here is that the only way to install software on an iPhone or iPod touch is with the App Store. There are also no provisions for beta testing¿ The only way to ?test? a fix is to release the changes to tens of thousands of users. It?s the developer equivalent of playing Russian roulette."

Now we're hearing from an app developer that Apple is finally going to start rolling out a new beta program in the next few days. Details are slim, but it seems like Apple is capping the total number of beta participants at 100 per app. In order to download a beta app, users will need to submit their iPhone's serial number to the developer, who will then need to flag its eligibility in the store itself. All betas will still be distributed through the App Store - you won't be able to download one on an external site.

It sounds like developers that haven't had their apps approved yet will still be able to participate in the beta program. This should alleviate some of the developers' anxiety (at least they'll know their app will work once it goes live), but it still doesn't address the the delays and lack of communication that many developers are complaining about.