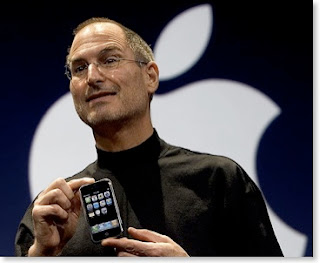 A Little 'Intel' on Apple's Next Move
Wondering what Steve Jobs will announce in his Macworld keynote on Jan. 15? The newest chips from Apple's sole supplier offer some intriguing hints.


With Macworld Expo just days away, the pre-"Stevenote" buzz is building fast. The rumors about what Apple Chief Executive Steve Jobs might unveil in his keynote speech run the gamut from a new movie-rental service for iTunes and Apple TV to a new tablet PC.

But when guessing what Apple (AAPL) will do in the coming year, it's particularly helpful to look at the roadmap of Intel (INTC), which has been Apple's only chip supplier since 2006. And from the looks of things, the chipmaker may help lead Apple into uncharted, possibly lucrative, territory starting in late 2008.

Subnotebooks: A Perfect Fit
A lot of the speculation has focused on Apple's apparent plan to introduce a small notebook computer, and I think these rumors are pretty close to the mark. For one thing, beyond switching from PowerPC chips to Intel processors in 2006, Apple hasn't made any serious revisions to its notebook line in some time. And the most obvious hole in Apple's computer lineup is in the subnotebook category. Right now, the smallest MacBook sports a 13.3-inch screen and weighs a hefty 5 pounds.

That's why it's time for Apple to launch a new product some are calling the MacBook Mini, with a screen of less than 10 inches and weighing no more than 2 pounds. A new family of Intel chips named Silverthorne may go a long way toward helping Apple get there. These chips will be notable for their very small size, relatively beefy computing power, and very low power consumption.

The first chip of the Silverthorne family, code-named Menlow, is expected to arrive in the first half of this year, probably before June. A second, known as Moorestown, due in late 2008 or early 2009, will be built on Intel's 32-nanometer manufacturing process, which means it will be even smaller and more powerful and it will consume even less power than the Menlow. This will make it a contender for use not only in subnotebooks, but in a new generation of iPhone devices.

There are hints from other vendors using Intel chips that the subnotebook category could be a winner in 2008. Consider the Asus Eeepc, a tiny, $350 notebook with a 7-inch screen that weighs less than a pound and uses an Intel Celeron chip. It runs Linux, supports Wi-Fi, and from what I'm hearing has sold some 400,000 units worldwide. There's also the tiny LifeBook U810 from Fujitsu that sports a 5.6-inch rotating screen, weighs about a pound and a half, and uses an Intel A110 mobile chip.

Expanding the iPhone Universe
Although the tiny Silverthorne is not as powerful as Intel's top-of-the-line Core2 or Core2 Duo, it will support the x86 instruction set that makes a PC chip a PC chip. That's especially noteworthy in terms of the iPhone. Right now, the main chip inside the iPhone comes not from Intel, but from Samsung. And the Samsung chip is not an x86 chip, but one based on a core from Britain's ARM Holdings (ARMHY).

The possibility of squeezing an x86 chip like Silverthorne inside a future iPhone would make adapting software from a future Mac computer for Apple's handheld substantially easier. (This assumes that Apple makes good on its promise to make the iPhone software development process easy and open.) Suddenly, the iPhone would be capable of running pretty much any Mac software with few, if any, programming changes.

While Intel's tiny new chips will be an important factor, Apple may have more dramatic changes in store.

News Flash: No Hard Drive?
I'd expect the new little notebook to ship without a traditional hard drive, relying instead on at least 32 gigabytes of flash memory for storage. Already the world's largest consumer of NAND flash memory after SanDisk (SNDK), Apple is in a better position to popularize solid-state storage in mainstream computing devices than any other vendor. Long-term supply contracts with Samsung, Toshiba (TOSBF), and Micron (MU) give Apple plenty of incentive to design software that can take advantage the unique properties of flash memory. Windows-based vendors such as Dell (DELL) and Hewlett-Packard (HPQ) will have to follow its lead.

But will this new mini-MacBook also get a touch screen like the iPhone's? Perhaps, but probably not. The bigger the screen, the more it will cost. I think that means Apple will skip the multitouch screen to keep the retail price manageable.

The MacBook Mini could conceivably be unveiled as the "Just One More Thing" that appears at the end of every Jobs keynote. It's doubtful the machine would be available for immediate sale because Menlow isn't thought to be shipping in volume yet. But Apple and Intel could surprise us. Intel shipped some 210 million PC chips last year, 7 million of which were for Macs, making Apple one of Intel's most important customers and giving it a reason to move faster than anyone expects.

Apple Inc. CEO Steve Jobs's annual Macworld surprise may be a slimmed-down laptop and a higher-capacity model of the iPhone.

Jobs traditionally uses the Macworld Expo this month to showcase new products. Last time, it was the iPhone and Apple TV; the year before, faster Macs with Intel Corp. chips.

There's always a possibility they'll announce something that no one has thought of yet," said New York-based Bailey. He recommends investors buy Apple shares.

Speculation about what Cupertino, California-based Apple might introduce contributed to an average five-per-cent rise in the shares between Dec. 17 and the first day of Macworld Expo in each of the past three years, said Munster, who is in Minneapolis.

The shares have more than doubled this year, making them the sixth best- performers on the Standard & Poor's 500 Index.

Analysts speculated that Apple would add a "sub-notebook" or "ultra-portable" personal computer. The machine would be smaller than the smallest Mac notebook today, which has a 13-inch screen. Apple also sells the MacBook Pro, which have 15-inch or 17-inch displays.

While sub-notebooks accounted for less than eight per cent of portable PCs sold in each of the past two years, shipments may rise 20 per cent to nine million units in 2008, said researcher IDC in Framingham, Massachusetts. The machines typically have 12-inch or smaller screens and weigh less than four pounds (1.81 kilograms.)

"Ultra-portables don't sell a ton," said Andy Hargreaves of Pacific Crest Securities in Portland, Oregon, who expects Apple to introduce one in January. "Then again, music players didn't sell a ton until Apple came out with the iPod."

The company last introduced a sub-notebook in 1997. Called the PowerBook 2400c, it had a 10.4-inch display and weighed 4.4 pounds. Prices for sub-notebooks start at about $1,500, more expensive than standard notebooks, IDC analyst Richard Shim said.

A slimmed-down Apple notebook will cost less than the $1,999 MacBook Pro and have a screen between 11-inches to 13-inches, Munster said this week in a note, citing unidentified Asian component suppliers.

"It's a segment they could dominate because of their ability to create stylish products," said Goldman's Bailey, who doesn't expect a smaller notebook until the second half of 2008. "It's 10 per cent of the market they didn't have access to previously."

Any new device Jobs unveils will expand the Macintosh-iPod-iPhone trio that have contributed to record sales and profit. IPod shipments may climb as high as 25 million units this quarter on demand for the slimmer Nano and new Touch models introduced in September, Munster said.

Sales of the iPhone, released in the U.K., Germany and France last month, may reach 2.1 million units over the holidays, said Reitzes.

Apple had sold almost 1.4 million phones in the first three months after releasing the music-and-video-playing device in June in the U.S.

Apple may increase the capacity of the iPhone to 16 gigabytes while keeping the price at $399, Munster said. The company will probably introduce a version that works on high- speed networks in 2008, he said.

Jobs, 52, also may introduce a larger-screen handheld device for playing music and video and surfing the Web, said Andy Neff, an analyst at Bear Stearns & Co. in New York. Apple may also unveil a new version of Apple TV, a $299 device that connects to TVs and lets people watch movies and shows stored on their PCs.

Apple needs to add more movies to its iTunes store to spur demand for Apple TV, which hasn't been a big seller for the company, Neff said in an interview.

There are more than 500 movies and 550 TV shows available through iTunes.

"There are some hard-core fans that no matter what Jobs announces, that won't be enough," said technology commentator Scott Bourne, who hosts a weekly podcast called the Apple Phone Show.

"And there are some people for who, no matter what he says, are words from God's mouth."
Posted by SANJIDA AFROJ at 7:28 PM