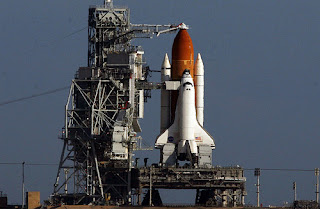 NASA set a tentative date yesterday of Jan. 24 to launch the space shuttle Atlantis, which will carry a long-delayed European space laboratory to the international space station, while saying that additional troubleshooting may be necessary to repair a nagging problem with the external tank's backup fuel gauges. That could force a further delay until next month, officials said.

John Shannon, the deputy shuttle program manager, said the agency thinks it knows what caused the problem and how it can be solved. Engineers will begin making repairs next week at the Kennedy Space Center in Florida, but 10 to 14 days of additional testing will be needed to make sure they fully understood the problem.

"To make the 24th, everything has to go right," Shannon said. "But we're also looking at February 2 if things go like we expect they'll go."

After the two failures, the agency sent parts of the malfunctioning sensors to the Marshall Space Flight Center in Huntsville, Ala., where they will be tested in a bath of gaseous helium starting next week. While NASA engineers now believe they have figured out why the problem occurred, Shannon left open the possibility that the launch could be further delayed if the testing at Marshall does not confirm their analysis.

Shannon called the proposed repair -- which involves soldering together parts of an electrical cable rather than relying on a pin-and-plug system -- "a simple and elegant change." A similar problem on the Atlas-Centaur rocket was solved with soldering, he said.

Atlantis has been stuck on a launchpad since Dec. 6, when the fuel sensors first failed. The sensors are a backup safety system designed to shut down the shuttle's three main engines if their fuel supply runs out, to avoid the extreme danger of running the engines and their massive fuel pumps on a dry tank.

Engineers think the problem is in an electrical connector and plug that route wires through the wall of the tank to the sensors. After similar malfunctions with the sensors in 2005 and 2006, engineers thought they had solved an electrical problem in the gauges themselves, not in the connectors.

William H. Gerstenmaier, NASA's director of space operations, said yesterday that the agency now thinks there may have been problems with the gauges and the connectors.

The Columbus space lab, which cost its European builders $2.1 billion, was ready to be added to the international space station before the 2003 space shuttle Columbia disaster. The lab will greatly increase the amount of research that can be conducted on the station once it is fully operational and the space station crew doubles to six.

Even if the shuttle is ready to launch next month, it may not have an open docking port at the space station because a Russian cargo ship is scheduled to arrive there Feb. 7. Shannon said NASA officials are discussing the schedule with the Russians.

Despite the delays in the Atlantis launch, Shannon said he is confident that NASA will be able to launch the final 13 shuttle missions by September 2010, when the remaining three space shuttles are scheduled to be retired.

NASA on Thursday delayed the flight of space shuttle Atlantis until late January or, more likely, February to replace a suspect connector in the fuel tank.

The connector is believed to be responsible for back-to-back launch postponements last month.

Deputy shuttle program manager John Shannon said the mission to the international space station is off until at least Jan. 24. "Everything has to go exactly right for us to make the 24th," he said.

Shannon said it's more likely that the launch will move into February. The shuttle almost certainly would have to wait until a Russian cargo ship is launched on Feb. 7 and docks two days later.

Atlantis was poised to lift off in early December with a European space station lab named Columbus but fuel gauges in the external tank failed late in the countdown.

The problem reoccurred during a second launch attempt, prompting NASA to conduct a fueling test just before Christmas. That's when the trouble was traced to a connector that feeds wiring through the wall of the fuel tank. The circuitry runs between the fuel gauges in the bottom of the tank and the space shuttle.

The fuel gauges are part of a critical safety system to prevent the shuttle's main engines from running on an empty tank, and have malfunctioned off and on for more than two years. Engineers suspect a design flaw.

NASA removed the external portion of the suspect connector, along with some plugs, over the weekend. It will be another two weeks before the parts are fully analyzed, mimicking the super-cold conditions of fueling, Shannon said.

In the meantime, engineers will replace the external connector and make modifications -- essentially soldering pins and changing the material of socket inserts.

"What we're doing...is addressing what we think is the most probable cause, and there's a lot of information that points to that connector and that this is the right design fix," Shannon said.

Shannon would not estimate how long the delay might be if engineers determine that the interim solution is not enough or something else is at fault.

NASA requires at least five weeks between shuttle launches, which means that a flight by Endeavour to the space station, carrying up the first part of Japan's massive lab, will not occur Feb. 14 as planned.

Until a firm launch date is set for Atlantis, NASA will not address the timing of subsequent flights, Shannon said.

NASA faces a 2010 deadline for retiring its three shuttles and completing the space station.
Posted by SANJIDA AFROJ at 6:39 PM