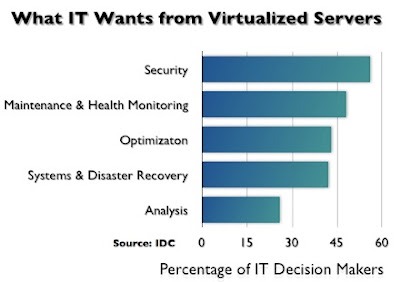 Hyper-V's performance could help the company's shares outperform the market by 10% over the next year.
Microsoft Thursday did something it rarely does. The company released a beta for a long-awaited technology -- in this case its Windows Server 2008 virtualization technology Hyper-V -- ahead of schedule.
Microsoft's Hyper-V debut came earlier than many technology analysts had expected, and it sets the software giant up for possibly releasing a full version of the virtualization technology in the first half of 2008, or about six months ahead of many expectations.
Virtualization is a technology that allows software applications and operating systems to be separated from their hardware systems and then shared over servers and storage infrastructure. Businesses then use virtualization technology to better manage large pools of data over fewer hardware systems.
Hyper-V, formerly code-named "Viridian," is now available for download from Microsoft's Web site and is ready to be used with the current x64 beta version of Windows Server 2008, which is also available online. The technology, called a hypervisor, is the underlying virtualization technology for the server release, which is a major update that's expected to be released on Feb. 27, 2008. A beta of Hyper-V originally was planned to be released on that date as well.

Virtualization, or the ability to use virtual machine technology to run multiple OSes on a physical server, is widely seen as a disruptive technology and is becoming increasingly important as companies seek to cut costs and consolidate hardware in their data centers and IT environments. Microsoft had originally intended to release Hyper-V as part of the original release Windows Server 2008, but the technology was delayed and is now scheduled to be generally available 180 days, or about six months, after Windows Server 2008 ships. Hyper-V's released was delayed earlier this year because Microsoft opted to pull out some originally planned features.

Hyper-V takes advantage of virtualization-optimized microprocessors from Intel and Advanced Micro Devices and is meant to help Microsoft compete with virtualization leader VMware, which already has hypervisor technology on the market. Hypervisors allow for cross-platform support so servers can run multiple versions of different OSes -- such as Windows and Linux -- side by side on one piece of hardware.
Posted by Md Moshiur Rahman at 5:46 PM