By varying the identity and spacing of the tethered molecules, researchers can make the technique applicable to a wide range of bait molecules includi 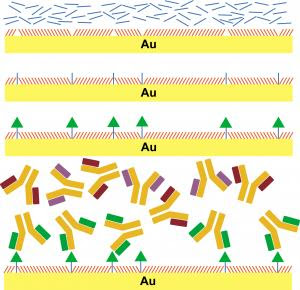 Capturing Large-Molecule Fish with Small-Molecule Bait. A single layer of molecules (red lines) that resists biomolecule binding is first self-organized on a gold substrate. This film has inherent defects and when it is placed in a solution of tether molecules (blue lines), they insert themselves into the holes. Next, bait molecules (green triangles) are linked to the tethers. When the surface is exposed to different proteins, only those with high affinity for the bait (color-coded green Y’s) bind to the surface. Spacing the molecular fishing rods at appropriate distances overcomes problems associated with selective recognition between large biomolecules and small ligands. In the example described, the small bait is serotonin, a neurotransmitter important in depression and anxiety, and the large fish are antibodies. In the future, this type of surface will be used to capture brain receptor proteins or synthetic sensors. (Credit: Mitchell J. Shuster and Thomas J. Mullen, Penn State)
A research team at Penn State has developed a novel method for attaching small molecules, such as neurotransmitters, to surfaces, which then are used to capture large biomolecules. By varying the identity and spacing of the tethered molecules, researchers can make the technique applicable to a wide range of bait molecules including drugs, chemical warfare agents, and environmental pollutants. Ultimately, the researchers also hope to identify synthetic biomolecules that recognize neurotransmitters so that they can fabricate extremely small biosensors to study neurotransmission in the living brain.
In the brain, dozens of different small signaling molecules interact with thousands of large receptive proteins as part of the fundamental communication process between nerve cells. This cacophony of specific interactions is highly dependent on nanoscale molecular structure. One key to advancing our understanding of how the brain works is to identify the nature of the association between neurotransmitters and their binding partners.


The technique of producing these high-affinity materials will be published in January 2008 in the journal Advanced Materials by a research team headed by Anne Milasincic Andrews, associate professor of veterinary and biomedical sciences, and including Paul S. Weiss, distinguished professor of chemistry and physics.

The process starts with a self-assembled monolayer (SAM), a single-molecule-thick layer that organizes itself on a surface. The molecules that make up the SAM terminate in and expose oligoethyleneglycol units that are known to prevent adhesion of proteins and other large biomolecules. Next, tether molecules are inserted into the defects that naturally occur in the SAM. Finally, a small molecule, in this case the neurotransmitter serotonin, is chemically linked to the tether molecules. Since the defects in the SAM occur at irregular but controllable intervals, serotonin molecules are prevented from clumping together. This is key to their being recognized by the correct proteins.

When the surface is exposed to a solution containing many different proteins, only those with high affinities for the tethered small molecule selectively attach to the surface. The bound protein molecules can then be identified in place or removed for characterization. "The tethered neurotransmitter acts like a fishing pole," says Andrews. "When the small molecule 'bait' is correctly placed on the surface, it captures much larger molecules that interact with it in a biologically specific way."

As a result of this inherent selectivity, it is possible to identify biomolecules, by function, from a sea of thousands of different types of molecules. Weiss adds, "The key to obtaining a highly specific association is producing optimal spacing of the tethered neurotransmitters. The ideal spacing allows large molecules to recognize the functional groups of the small molecule while avoiding nonspecific binding to the surface itself."

Because of their selectivity, these materials are suitable for a variety of investigations in biological systems. "Each neurotransmitter can bind to a number of different receptors in the brain," says Andrews. "Some of these receptors are known, but there are many more to identify. Also, the numbers of receptors are altered in different disease states and in response to treatment, and these capture surfaces could be used to study how groups of functionally related proteins change in a coordinated fashion."

What do you anticipate of Louis Vuitton handbags in this season? It seems disconnected into two sides- one is represented by Surya XL, avant-garde and casual; addition is best and versatile, on account of L’ABSOLU.L’ABSOLU de Voyage (the Absolute Travel) is the biking sized adaptation in archetypal tone.