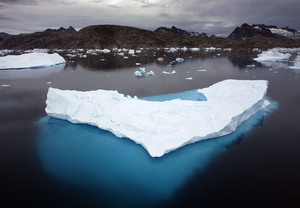 Icebergs off Greenland in a photo taken this summer. Data showed the volume of Arctic sea ice at summer's end was half the amount found four years earlier.

Carbon cuts a must to halt warming-US scientists

There is already enough carbon in Earth's atmosphere to ensure that sea levels will rise several feet (meters) in coming decades and summertime ice will vanish from the North Pole, scientists warned on Thursday.

To mitigate global warming's worst effects, including severe drought and flooding, people must not only cut current carbon emissions but also remove some carbon that has collected in the atmosphere since the Industrial Revolution, they said.

"We're a lot closer to climate tipping points than we thought we were," said James Hansen, director of NASA's Goddard Institute for Space Studies. "If we are to have any chance in avoiding the points of no return, we're going to have to make some changes."

The small amount of warming the Earth has experienced since the 1970s has already shrunk every glacier on the planet, scientists said this week at the 2007 meeting of the American Geophysical Union, where attention has focused on the unexpected acceleration of climate change.

"If you see that even a small amount of warming has had a notable effect on the ice, it's a good question what effect future warming will have," said Pennsylvania State University Professor Richard Alley.

Record melting occurred at the North Pole this summer, when for the first time in recorded history, ships sailed across the Arctic Ocean on water once covered by the polar ice cap.

In the summer of 1980, the North Pole was covered by an ice sheet about the size of the continental United States, but this year the ice would not have covered the states west of the Mississippi River.

"The only hope for a recovery is considerable and persistent atmospheric cooling, but with the warming trend so high, everything is working in concert toward a bluer or totally blue Arctic Ocean," said Josefino Comiso, a senior researcher at NASA's Goddard Space Flight Center.

Scientists say global warming is caused by carbon dioxide and other gases that trap heat in the atmosphere.

This goal might be achieved by using alternative fuels and new technology.

Researchers are working on a project that scrubs carbon dioxide from the stacks of coal-burning power plants. The gas is then permanently stored in rock formations and oil wells thousands of feet below Earth's surface, said Julianna Fessenden of the Los Alamos National Laboratory.

But that technology is at least a decade away, and while carbon emissions escalate, some scientists are investigating emergency solutions such as dispersing fine particles to reflect sunlight in the stratosphere.

"There is a sort of desperation and an opportunism that's emerging, because it's obvious that it's going to be difficult to reduce carbon emissions in the near term," said Richard Turco, a professor at the University of California, Los Angeles. (Editing by Xavier Briand and Todd Eastham).

A huge drop in sea ice sparks plea: 'The Arctic is screaming'

The dramatic decline of Arctic ice in recent summers greatly accelerated this year, a sign that some alarmed scientists worry could mean global warming is picking up speed.
Greenland's ice sheet shrank far below what scientists had previously seen, and the volume of Arctic sea ice at summer's end was half what was recorded four years earlier, according to new NASA satellite data.

"The Arctic is screaming," said Mark Serreze, senior scientist at the government's snow and ice data center in Boulder, Colo.

After reviewing his own new data this week, NASA climate scientist Jay Zwally said: "At this rate, the Arctic Ocean could be nearly ice-free at the end of summer by 2012, much faster than previous predictions."

As is often the case with global warming, however, more data also raise more questions for researchers. Chief among them: Was 2007's record melt a blip in a steadier trend or is the impact of global warming being felt faster even than most computer models' worst-case scenarios?

The new data, based on satellite images, came amid a U.N.-led conference on the Indonesian island of Bali that is aimed at laying the groundwork for international consensus on tackling climate change. But there is wide disagreement among nations about how to proceed.

What happens in the Arctic has implications worldwide. Because so much water is frozen in the form of ice, the melting eventually will cause a rise in sea levels.

A decline of sea ice also will affect weather patterns, with less rain and snow in some regions and more in others.

The extent of the 2007 retreat in summer ice surprised many scientists.

"I don't pay much attention to one year," said Waleed Abdalati, NASA's chief of cyrospheric sciences, "but this year the change is so big, particularly in the Arctic sea ice, that you've got to stop and say, 'What is going on here?' You can't look away from what's happening."

Greenland, which is mostly covered by ice, is of particular concern to scientists. If it completely melted - likely over a period of centuries, not decades - it could add more than 22 feet to the world's sea level.

Over nearly three decades of satellite observations, the extent of Greenland's ice melt has increased and then decreased every couple of years. This summer did not fit the pattern.

"I'm quite concerned," said Konrad Steffen of the University of Colorado, which gathered the latest data. "Now I look at 2008. Will it be even warmer than the past year?"

Melting of ice on Greenland and in the Arctic Ocean also alarms scientists because it becomes part of a spiral.

White sea ice reflects about 80 percent of the sun's heat off Earth, NASA's Zwally said. Without sea ice, about 90 percent of the heat goes into the ocean, which then warms everything else. Warmer oceans then lead to more melting.

NASA scientist James Hansen is expected to tell a meeting of researchers in San Francisco tomorrow that the Greenland data suggest that the warming of Earth has reached a tipping point in some ways.

"We have not passed a point of no return," Hansen wrote in an e-mail. "We can still roll things back in time - but it is going to require a quick turn in direction."
Posted by SANJIDA AFROJ at 3:02 PM